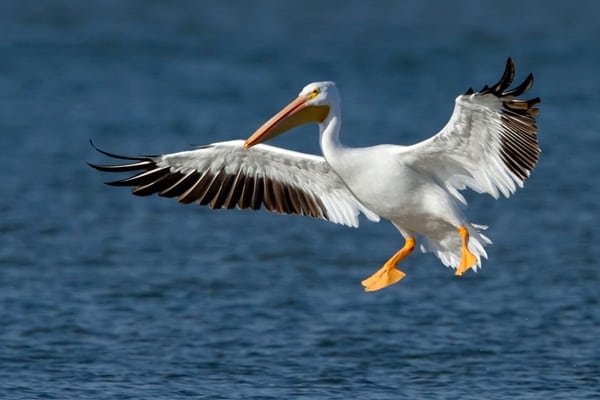 Birds are always a great fascination for humans because of their diversity and awesome characteristics. This remains as true now as it did back in the 20th century. There are birds with long beaks and colorful feathers that truly stand out among nature. You should imagine that when Mother Nature decides to specialize in any creature, she does it with style.

Some might have a fascination for a bird’s foot or feathers, but it is truly the beak that grabs most people’s attention. What is it with our association with beak when it comes to birds? This is what makes the pelicans of Alaska, with their long, powerful bills, and toucans, with their colorful beak, the life of the party.

Though we find bird beaks very beautiful, they function for so much more than aesthetics. They’re very helpful for finding and eating food, especially during winter. These amazing birds with long beaks use these parts of their anatomy to dig through the leaf litter efficiently.

It is the longest shore bird of North America at 20-26 inches and also known for another name: Sickle Bird. As an adult, it has a beak with an average measurement of 8.6 inches. The beak of this bird is the main attraction of its whole body. The female bird has a longer beak than the male. The Long Billed Curlew has a beak that is slightly curved downwards. 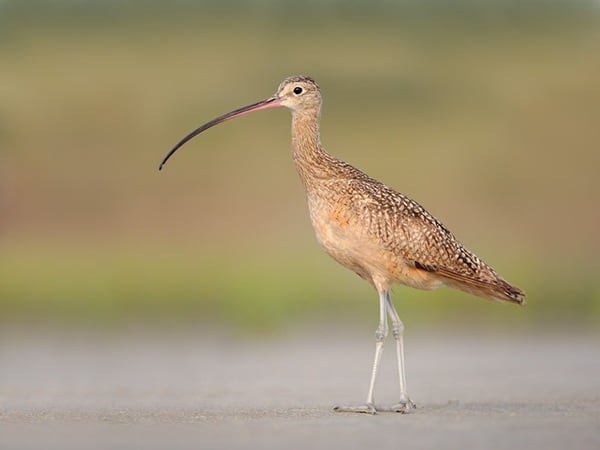 The gorgeous beak of this bird makes it completely unique from the other shore birds and firmly establishes it on our list of birds with long beaks. They are mainly native to North and South America. The structure of their bill is slightly different and the lower mandible is longer than the upper one. The bill is mainly a mixture of orange and black color. They use their 1-2 inch beak to hunt and search food. 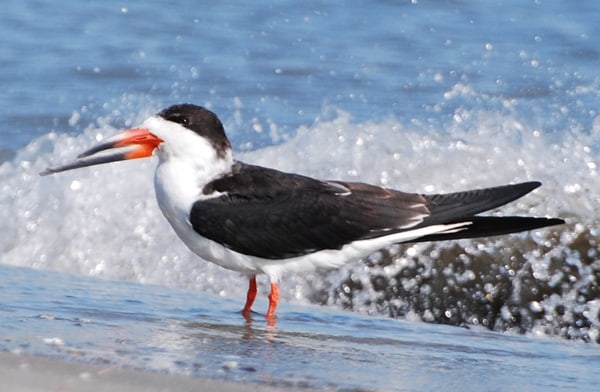 They are the largest bird in the aquatic world and are mainly native to Central and South America. Their huge beak measures up to 15.2 inches. The most interesting part of their beak is that the lower mandible acts as a filter which helps them to catch fish and drain away the excess water.

During the breeding season, their beak becomes deeper in color as their body temperature surges. That said, this body heat is also what keeps them warm during the colder seasons. On average, the beak in male is shorter than in females measuring up to 10-14 inches. 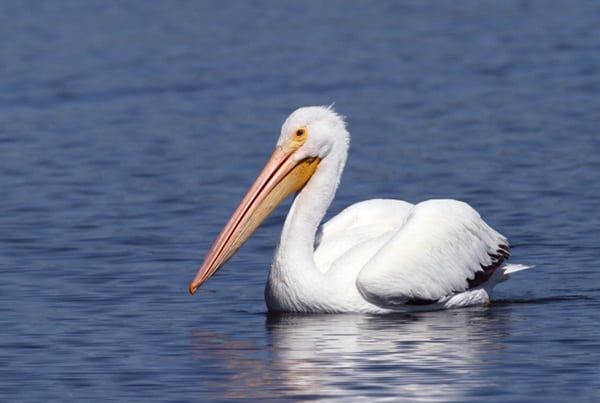 This bird has a bill which almost looks like a spoon and that’s why “spoonbill” is part of its name. The bills are very long and flattened, ensuring that their owners landed a spot on the list of unbelievable birds with long beaks.

These 28-32 inch birds are mainly found on the shores of Caribbean, Central America, and Mexico. This bird uses its beak to find small aquatic insects and fishes, which is just enough nutrition for its body weight. Also, the long legs of these birds help them walk in water. 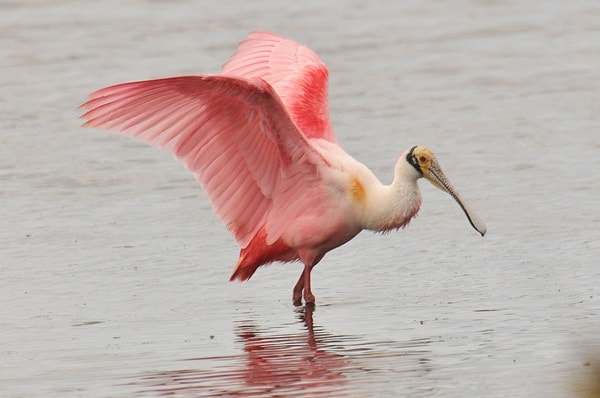 Many people know about this bird but there is still not enough information on Flamingos. Flamingos are 47-60 inch pink colored birds found in the saline and alkaline lakes of many continents. Just like their feather, their beaks are also very attractive, which makes them special among the bird species.

They have bent beaks which act as a filter while they feed in shallow waters. Their bills have a black tip and are pale orange towards the base and definitely make the cut for the “birds with long beaks” list. 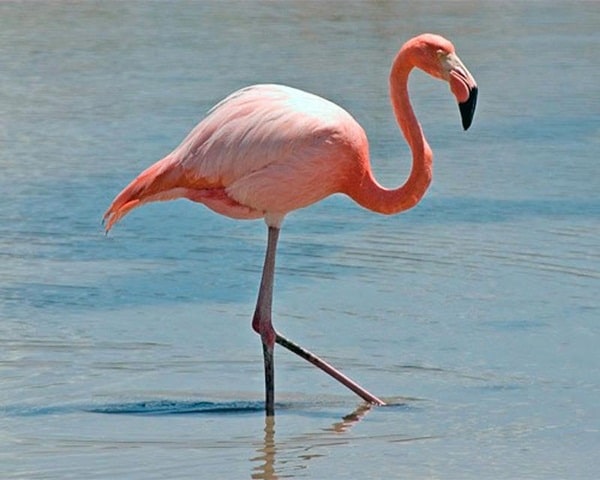 They are also known as rainbow billed toucan by many people. This bird is really very colorful and native to South America. Their beak is almost a third of their body size, which can measure 43-60 inches. They have one of the most colorful beaks among all the birds in the world. Their beak is also normally very strong and lightweight.

Great Hornbills are actually one of the largest members of the hornbill family at 37-41 inches in length, which is native to Southeast Asia. This giant bird has a yellow beak that’s curved downward, which serves as its most special attraction. They also have a Casque on top of their bill. If you were to Google beak image, this is what would usually appear. There was no way this wasn’t going to be a part of our list of birds with long beaks. 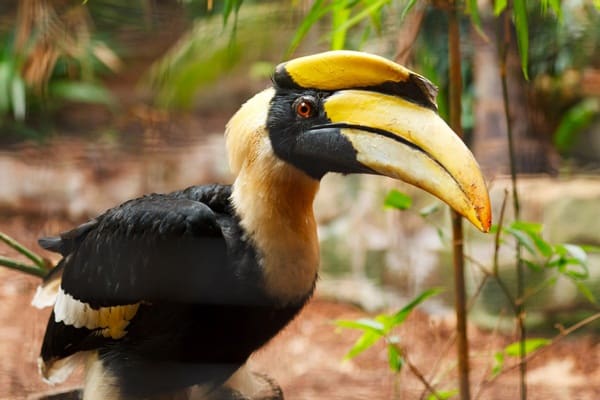 Rhinoceros Hornbill have an upward curve casque on their bill just like the rhino horn. The males have a slightly longer casque than the females. This bird is native to the rainforests of Indonesia, Thailand, and Singapore and has one amazing beak. 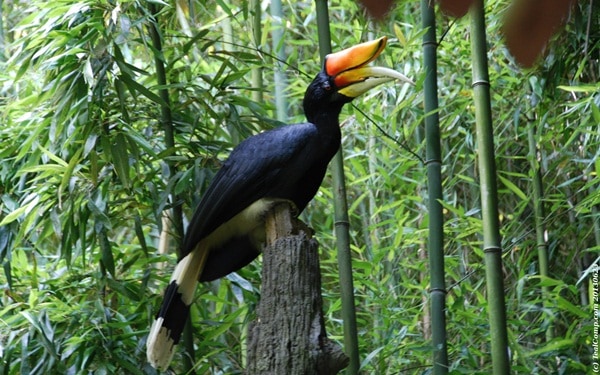 Like the Spoonbill, the Shoebill also has some source behind its name. The bill of this bird almost looks like a large shoe and is, of course, the most interesting feature of this bird. They generally use the sharp edges of their beaks to kill fish prey. It also has a sharp hook at the tip of the beak. 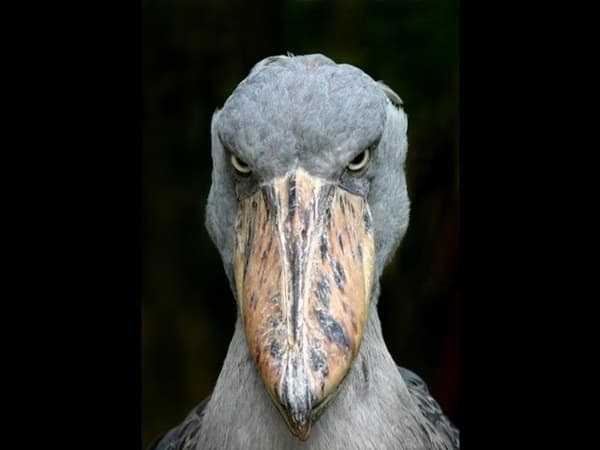 This hummingbird species has the longest beak in terms of body size. No other bird has such a long beak relative to their body size. You can say that these birds even have longer beaks than their body. It’s not beak abnormality or too much beak growth, either. In this case, it’s just how nature designed their beaks. 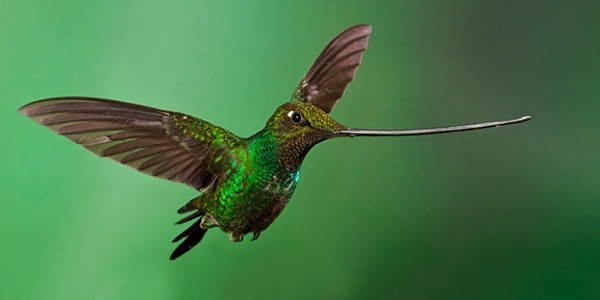 Toco Toucan can never be eliminated from our list of birds with long beaks because this bird has an amazing bill that covers almost 30-50 percent of their body. It would be a case of beak abnormality otherwise, but not with this bird. Their beaks are also very useful for peeling skins from fruit or for reaching places their full bodies can’t reach. 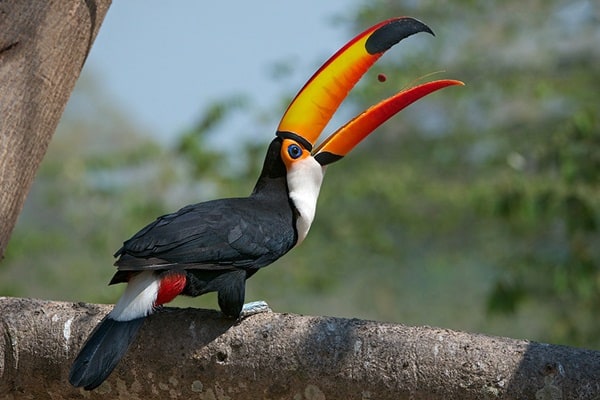 It is the only bird to have nostrils at the tips of its beak. Kiwis are known for their excellent sense of smell. They use their sense of smell to locate food through their bills. Despite not being the prettiest bird on this list, it’s definitely still among the birds with long beaks worth mentioning. 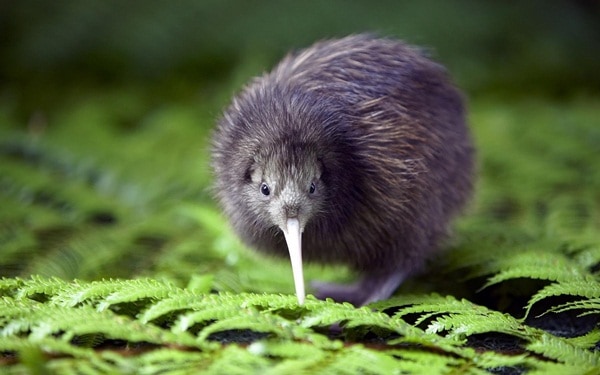 This bird is known as ‘the clown of sea’ because of the red and black stripes on its beak. The beak of this bird is one of the most interesting features of their whole body and makes them so attractive among the other birds. 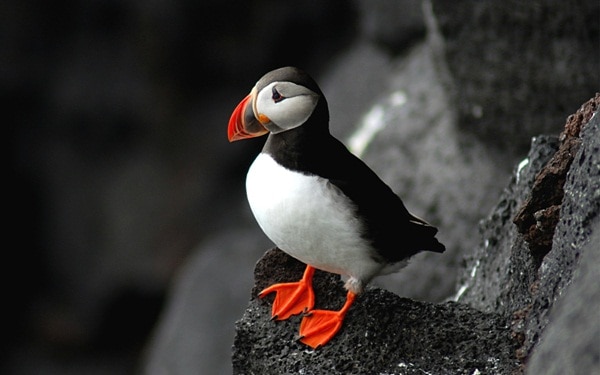 The American Avocet is a very interesting bird. They have a very unique appearance and actually the beak of this bird is very thin and curved. They generally feed on crustaceans and insects they find in the water with their beautiful beak. 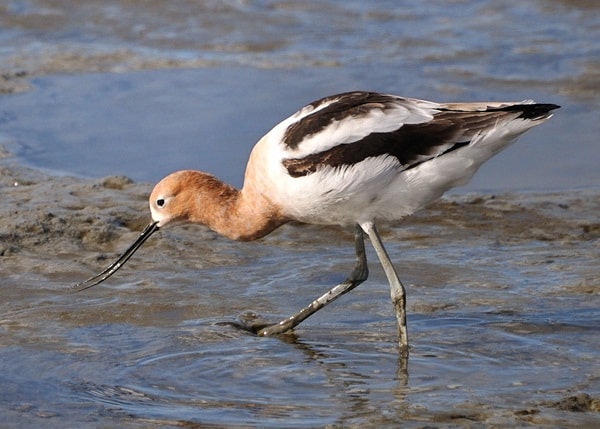 1. What is a bird with a long beak called?

There are quite a number of birds with long beaks, but the one that truly takes the cake is the adult sword-billed hummingbird, which inhabits the Northern Andes of South America. It’s beak is around three to four inches long, which, given its structure, makes it longer than the bird’s body.

It feeds on vegetation, including fuchsias, passion flowers, and flowers belonging to the genus Datura. Plants living in dense vegetation usually have long corollas, making their sweet nectar a little too out of reach for other animals. Where this particular food item is concerned, the sword-billed hummingbird holds a huge advantage.

2. What kind of bird is brown with a long beak?

The brown thrasher is a species of bird that’s a little bit smaller than a Blue Jay but bigger than a Northern Mockingbird. Nonetheless, it is a fairly large songbird with a slender build. It has a long and curved beak and a long tail that’s often cocked upward. Their eyes are bright yellow and their wings showcase two black-and-white bars. This is an American bird you’ll usually find inhabiting dense vegetation.

3. What causes overgrown beak in birds?

An overgrown beak happens when either the lower beak or upper beak grows too much, although it is usually the upper beak that far outgrows the lower. This condition can be due to abnormalities in development, imbalances in nutrition, diseases of the liver, infection, and trauma. It can also come in two common forms: parrot beak and scissors.

Another condition birds can suffer from, aside from an overgrown beak, is a deformed beak. Of course, beak deformities characteristics can also overlap with overgrown beak traits so you want to consult avian beak experts on the matter.

If you’re caring for a bird with beak overgrowth at home, make sure it has:

Remember, while there are birds with long beaks, you can’t have a bird with an unhealthily long beak.

4. What kind of bird has a long skinny beak?

The American Avocet stands out for having a long, elegant, and amazingly thin beak that curves slightly upward, which is the reason it came in at number 14 on our list of birds with long beaks. Its body looks as delicate as its beak and sways side to side so elegantly when it peruses the water for food. This beautiful fowl normally feeds on insects and crustaceans.

So here is the list of birds which are mainly famous for their unbelievably long beaks. These beaks are mainly used for many purposes, as we have said in earlier points. These beaks are amazing to witness in reality, but what’s more important is you know how to take care of them in your pet bird.

To be the best bird owner you can be, you must learn about proper bird feeding and beak trimming, know how to identify the signs of beak wear, have a detailed bird description of your chosen fowl, and figure out its unique bird character. Birds with beak are among the most gorgeous natural creations you will ever see, so make sure to care for them like they’re not just part of the bird family but your family.