Home
Health
7 Causes of Bacterial Infection In Turtles and Tortoises 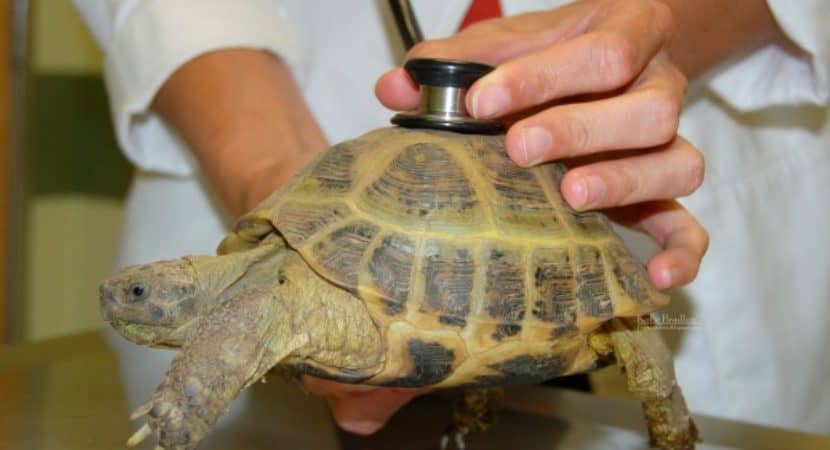 Turtles and tortoises are a species of reptiles characterized by cartilaginous or bony shells that also acts as their shield. They are generally fresh water and sea-dwelling creatures. Some of them are categorized under endangered species. It has now been observed that these species of the reptiles’ family have been acquiring various bacterial infections. Bacterial infections are very common amongst all the species of turtles and tortoises. Maybe some of us really know a lot about turtles and tortoises but today here we will be talking about 10 weird species of turtle and tortoise living in this world. Though with proper nourishment, accommodation and hygiene many of these infections can be duly taken care of! But even in the most well-cared turtles or tortoises, infections can still occur and cause it spread others diseases uncontrollably. So, if you have these animals as your pet and you are inquisitive to know what they are, then we have brought them together in this article. 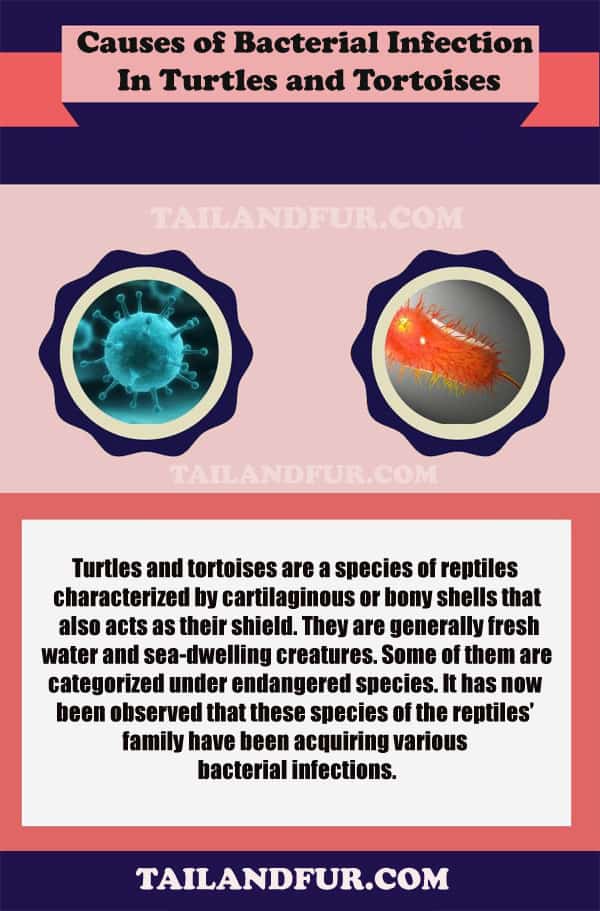 Causes of Bacterial Infection In Turtles and Tortoises 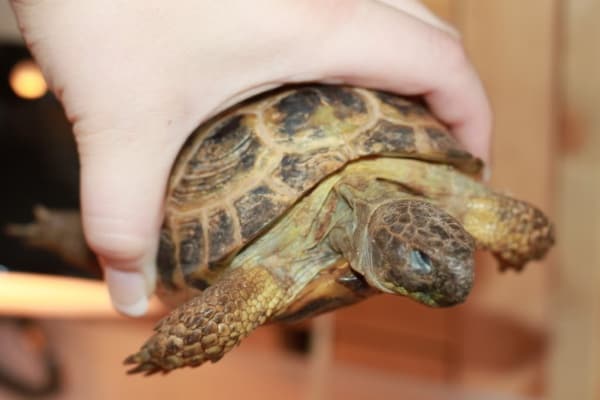 That often begins with a small whitish spot on the corneal surface, the infection progresses over the entire surface leading to Ulcer and might also spread to eyelids leading to swelling and irritation. These are different from cataracts. It may happen due to the contamination of water where they dwell or drop in humidity. Vets generally administer antibiotic eye drops to treat the disease. 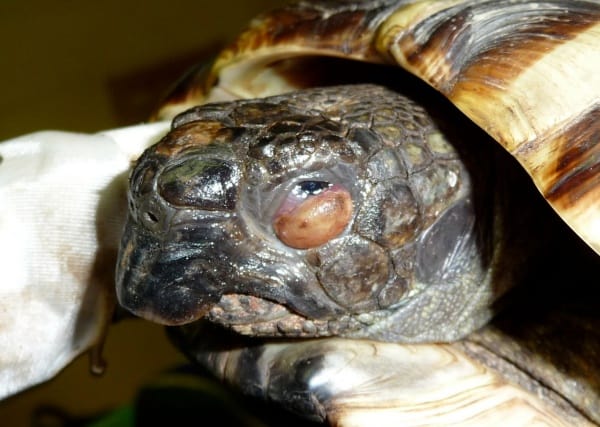 Another kind of a bacterial infection, also known as mouth rot which is self-explanatory and is caused either by Pseudomonas or Aeromonas, both a type of bacteria. Betadine May generally be used to treat the condition if it is mild. Apart from the bacteria, there are various other underlying factors which may be responsible for the turtles to develop mouth rot, such as, trimmed beaks, under-developed jaw alignment or any other kind of external injury. 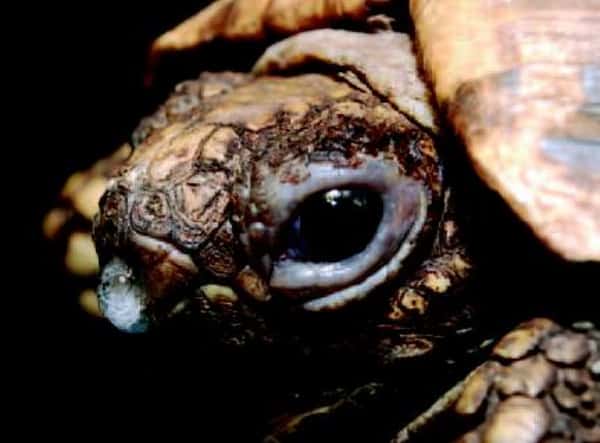 Another common cause of bacterial infections in turtle & tortoises is Pneumonia. It may range from an acute form which might suddenly occur resulting to death of this species to a more chronic one. If it is an acute stage, there may be symptoms such as respiratory distress with open mouth breathing or gasping, accompanied with coughing. Hyperactivity can be another symptom. When it is in an acute stage, it may show respiratory distress and nasal discharge. Antibiotics are generally administered to treat this condition. 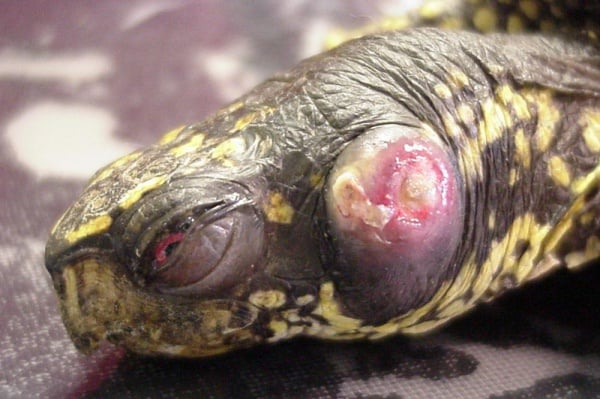 Cloaca, a cavity at the end of the digestive tract and cloacitis is an infection affecting the cloaca resulting in an inflamed opening of the cloaca and a foul-smelling discharge. Beta dine is generally used to treat this condition. 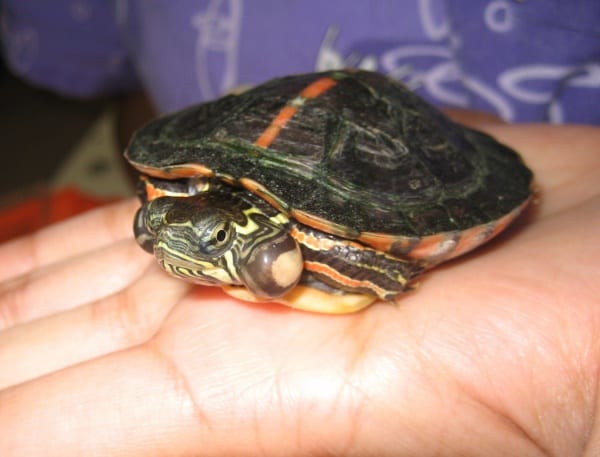 Relating to ear as the name suggests, ear abscess is generally a pocket of pus. The symptoms may range from swelling of the tympanic membrane and the discharge of pus into the back of the throat through the Eustachian tube. At an early stage of detection, antibiotics may be used and in severe cases. 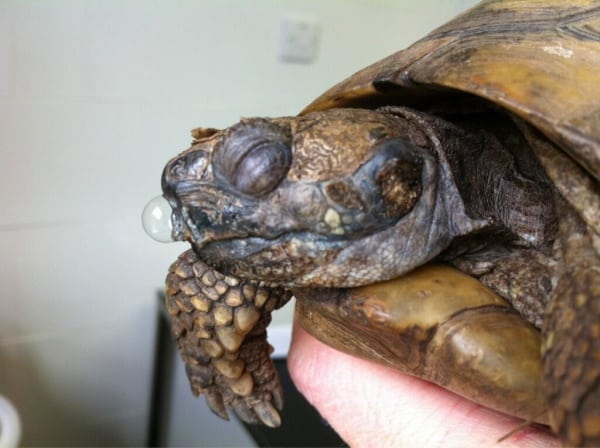 We have talked about ear abscesses; let’s know about abscesses in general. It is a common condition, in fact, in most of the species belonging to the reptile clan. It may affect the ears, legs, jaw, liver, nose or nasal cavity. They may occur beneath the skin or as hard lumps. Surgical removal is generally recommended in such cases in order to save them from Abscesses. People keeping tortoise in their home often feel confused about their living area, so here you can get 10 such examples that will give you an ideas of tortoise crate. 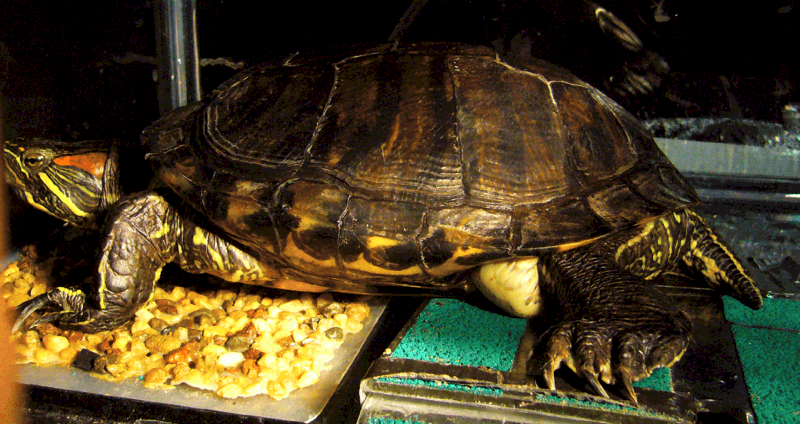 The most serious conditions in the list of Causes of Bacterial Infection In Turtles and Tortoises and often occur together in the affected area. Gout generally occurs due to high intake of proteins leading to excess blood urea level. Swelling of the limb joints, pain and stiffness of the joints can be the identifying symptoms. In mild cases, injectable antibiotics may be administered, however, in severe cases, the limb may need to be amputated. 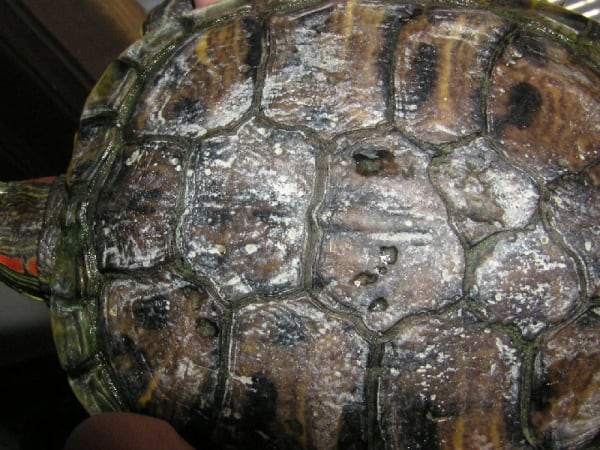 Another common medical condition found in turtles and tortoises is the Ulcerative Shell Disease. Also, often termed as SCUD or Shell-Rot. The condition has two main aspects – dry and wet. In the former stage, a fungal infection generally occurs in the shell that needs to be treated with the help of some anti-fungal medications as prescribed by the Vet. And in the latter stage, the condition is mostly associated with gram-negative bacteria and often develops if an injury takes place in the shell. Removal of the infected scute may be required after using a diluted beta-dine solution followed by a topical antibiotic.

Bacterial infection is common in these shelled creatures, i.e., turtles and tortoises. However, these can be prevented with the help of good sanitation, housing, nutrition and proper care. With modern technology and advanced treatment procedures, these Causes of Bacterial Infection In Turtles and Tortoises can be easily and effectively treated. So, take good care of your pets and let them live a bacteria-free life – Always and Forever.