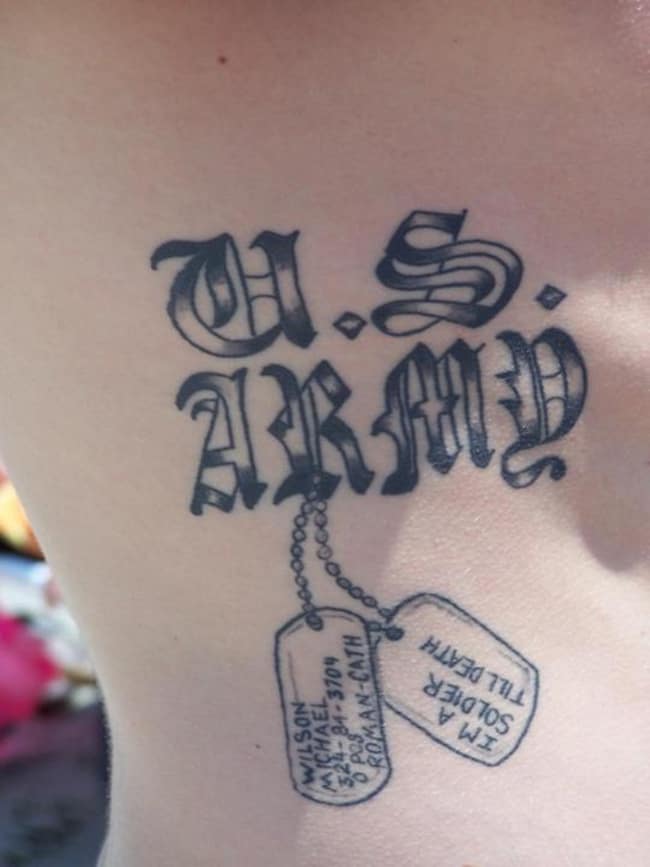 Many military people are known to wear dog tags for numerous reasons. The tag helps in the identification of the person wearing it along with the many details like the blood group, religion etc. Normally in war, the dog tag becomes one of the ways of identifying a body. Plus a dog tag becomes vital in saving the lives of those who bravely fight for us. The US military dictates everyone wears dog tags in pairs. In case a soldier dies, then one of the tags is collected and the other left with the body in case when war makes it difficult to take the body with them. 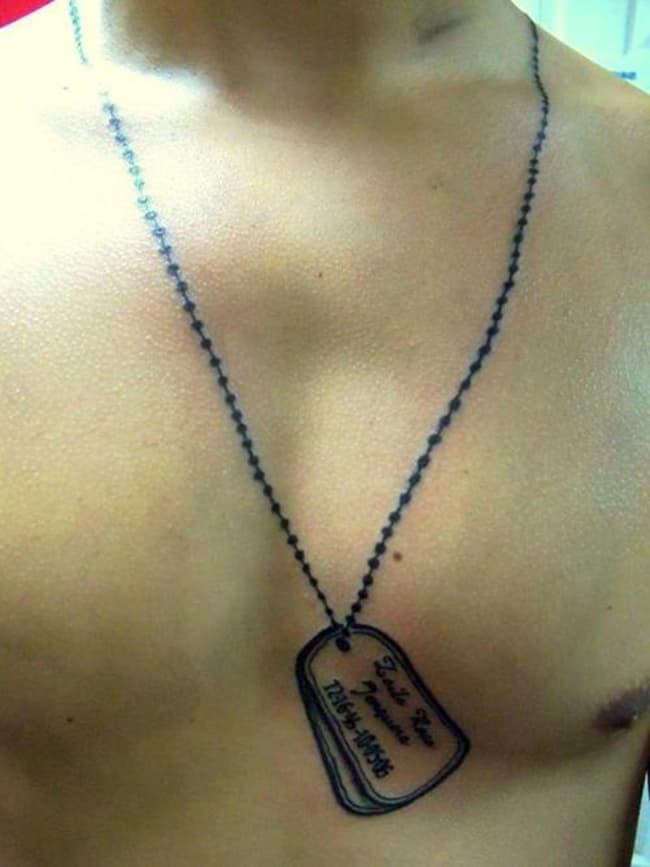 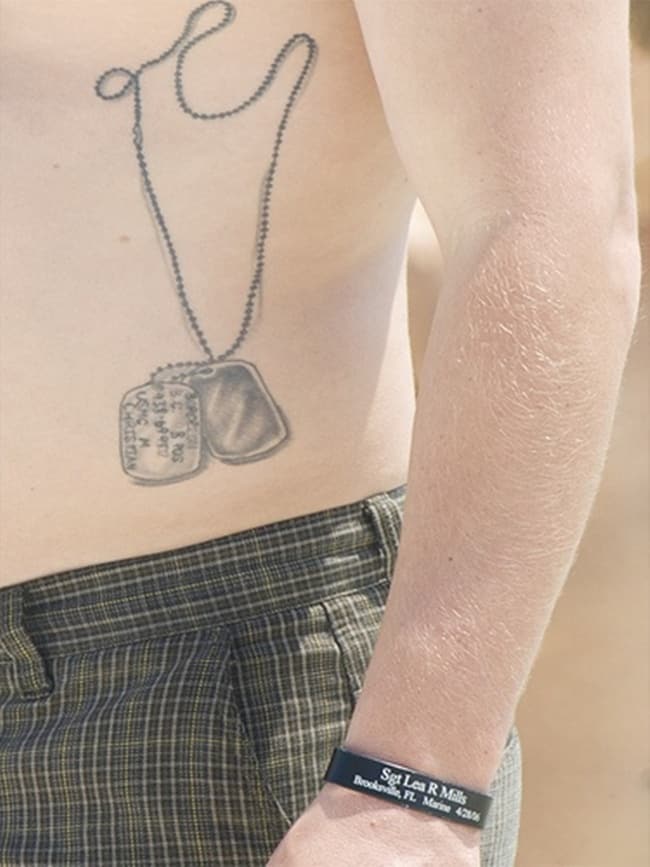 These dog tags have taken more importance to the person wearing it and also people associated with that person.

Tattoo designs featuring dog tags can be designed in many ways. Normally the dog tag is shown as being on a chain. But when it comes to dog tag tattoo designs it can show anything you want it to. Some people may get their rank, outfit and name put in along with the tattoo of the dog tag. Since the military features heavily in this the use of tanks, bullets, bullet casings, helmets, boots or the flag is not uncommon. 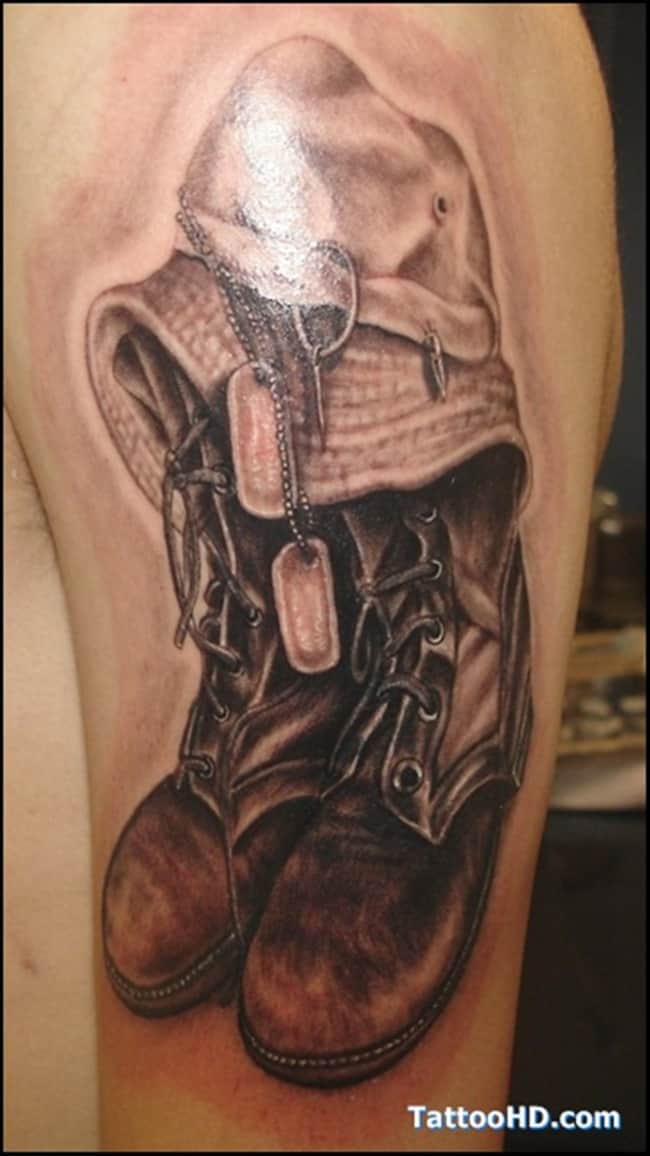 Some use the dog tag tattoo to commemorate the memory of near and dear one who served with them. It can also be used to generally honor those who fought alongside you.  Some people like to add symbols of religion, spirituality and blessings like a cross, a string of rosary beads, or hands held in prayer or even flowers along with the dog tag tattoo. It is a matter of what is personal and precious to you.

Some people even without any military associations can still get the dog tag tattoo done,  It could be someone who aspired to go into military but could not or in remembrance and as a tribute to those who died fighting for us. It could be of interest for those generally in public service. Even gangs and groups have an interest in dog tattoos. 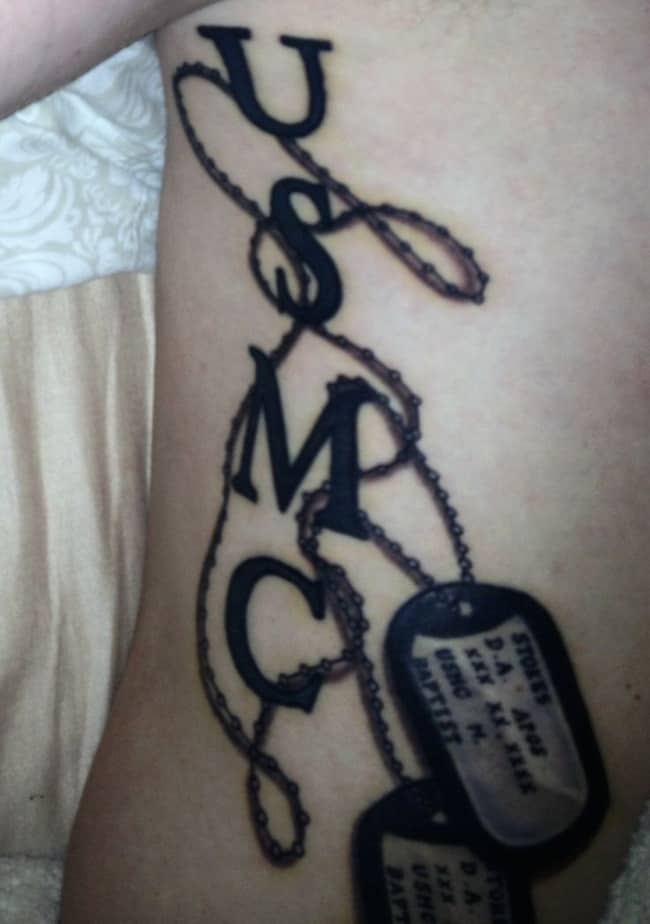 Where you get the dog tag tattoo done will also determine the size of the tattoo. Many people go with dog tag tattoos in the same area that it is worn – that is the neck. But you can have your dog tag tattoo designed anywhere on the body.

If you are considering getting a dog tag tattoo, then do consider the where, the how big and what design. But also consider the ways in which you can make it special and personal. Add those things and symbols that will make it uniquely your own. 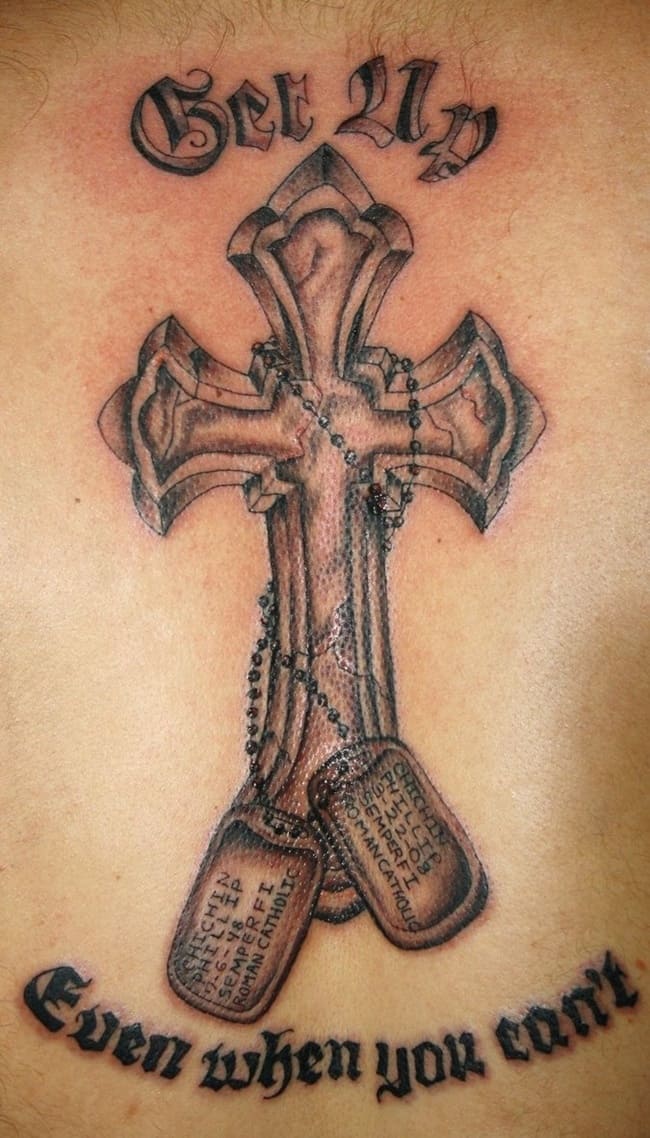 Meanings of dog tag tattoo: Generally these tattoos have a lot of meanings and most of them very positive and inspirational in nature. They could among other things mean the demise of a loved one, the love for a country, deep respect, immense courage,  lots of strength, unshakable spirituality, lots of faith and a huge amount of hope.

A word of caution and guidance: When you are getting your dog tag tattoo think, research, consult and discuss before proceeding. You cannot go about making a decision to get a tattoo of such significance flippantly; you need to think and ponder. Plus a tattoo is something permanent and you need to invest your time and thinking before you invest your body and money on getting it. 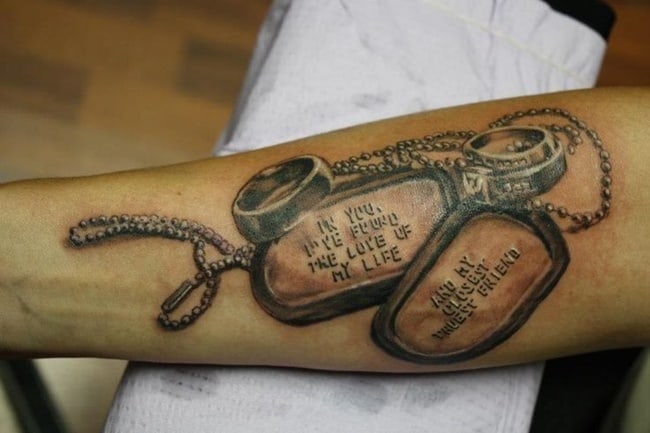 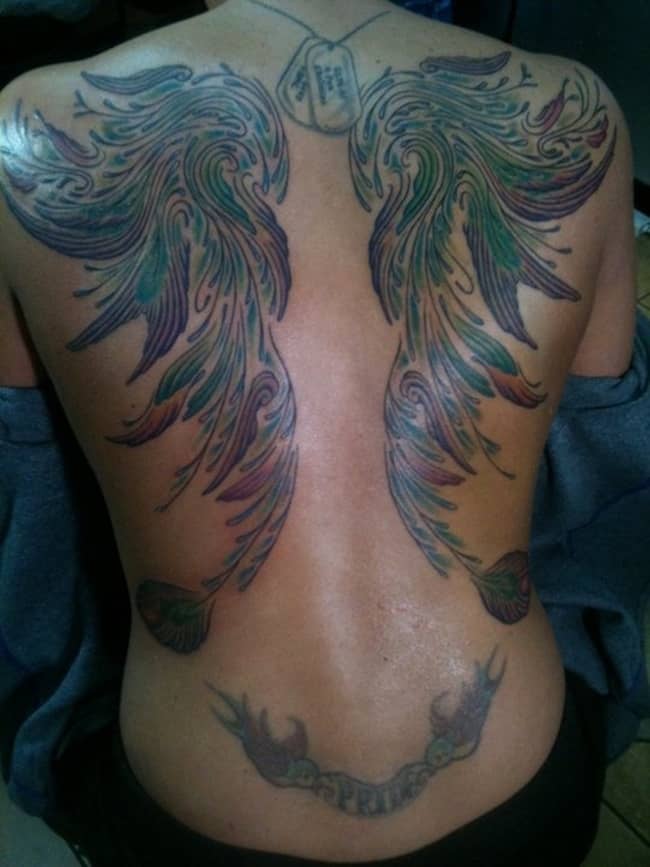 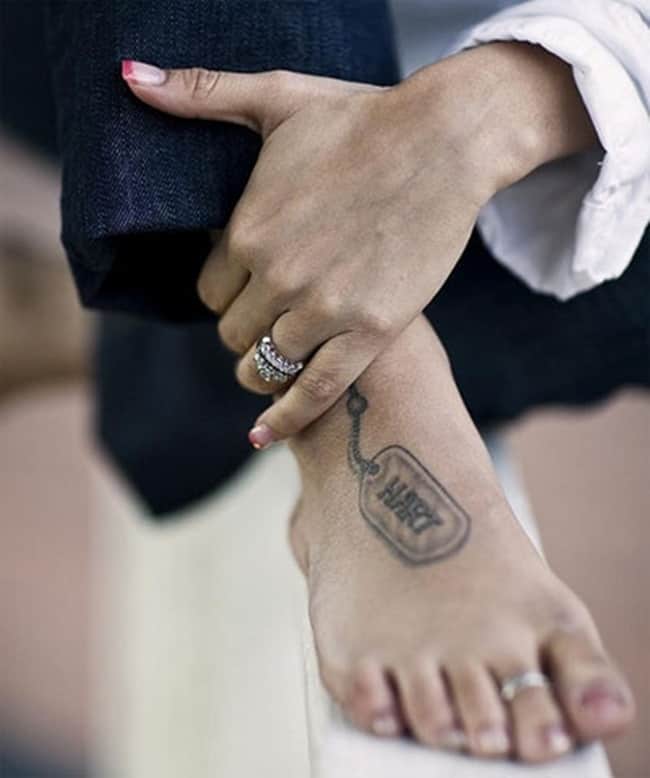 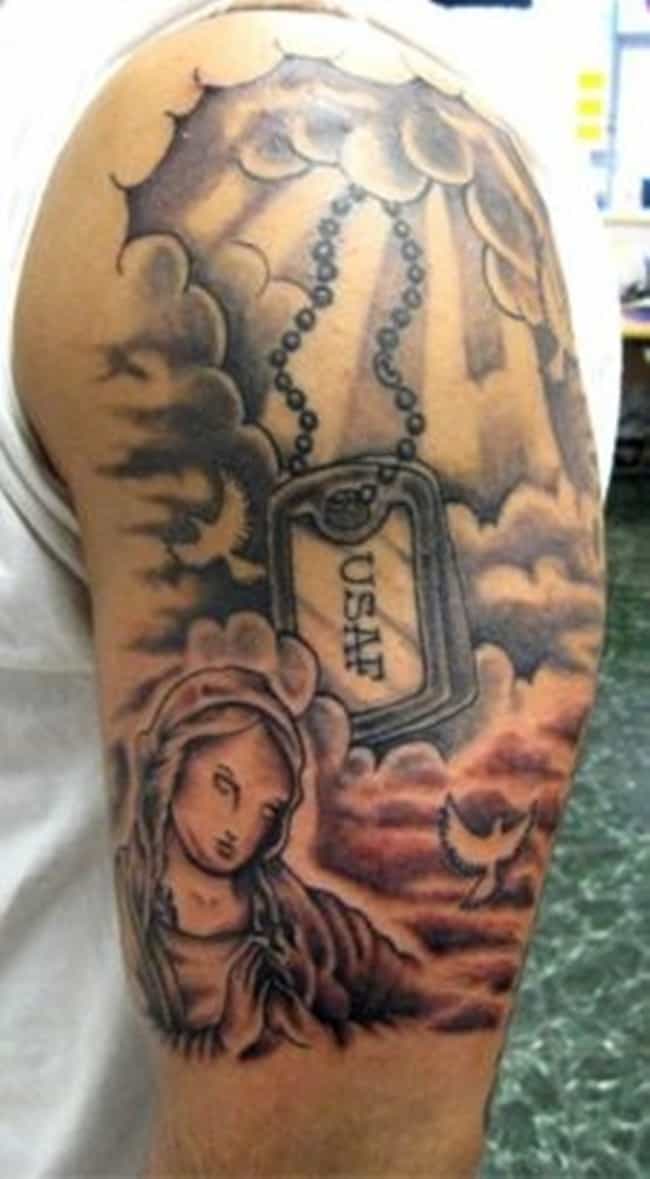 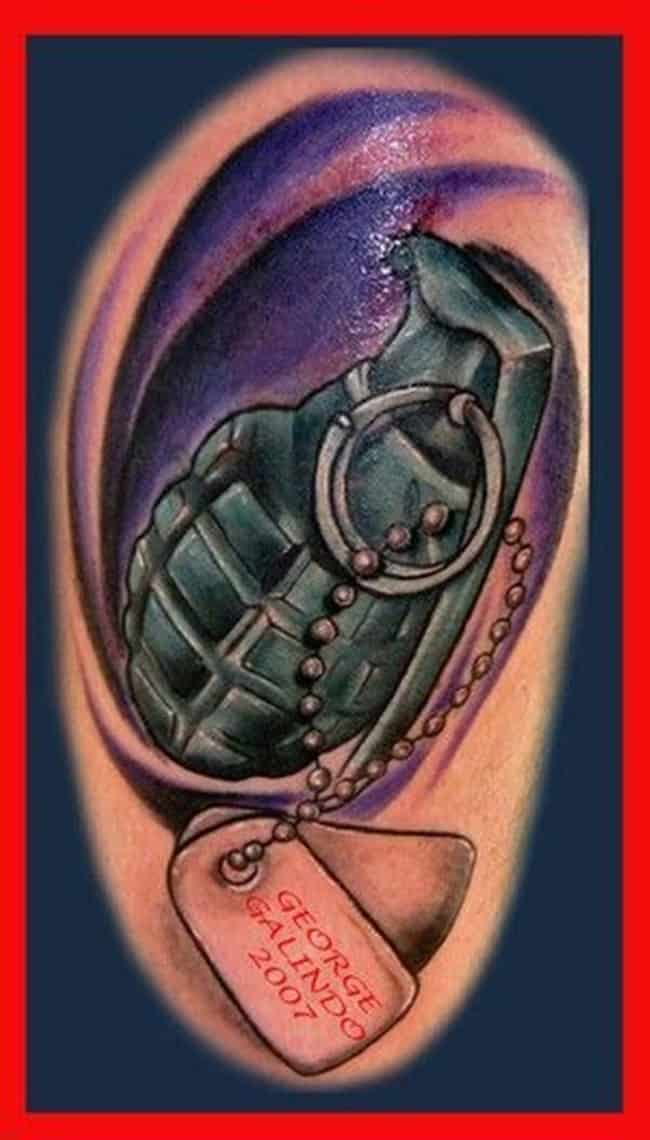 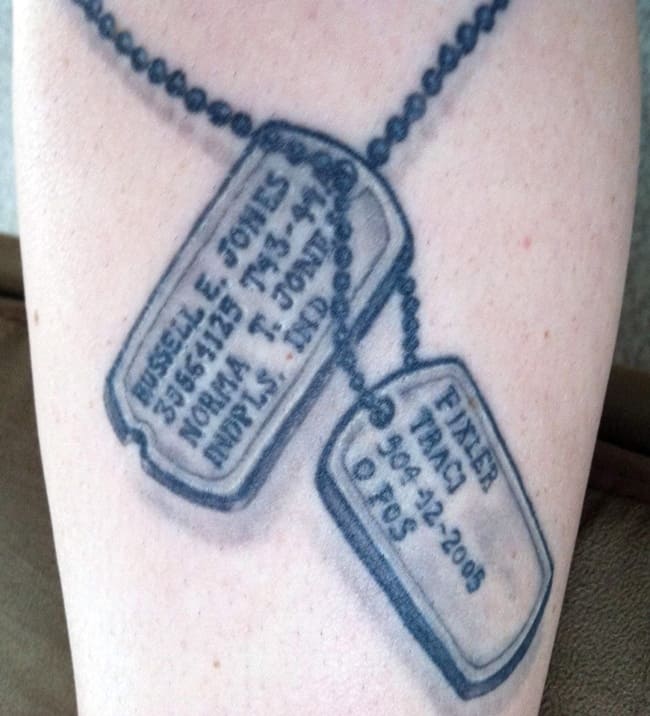 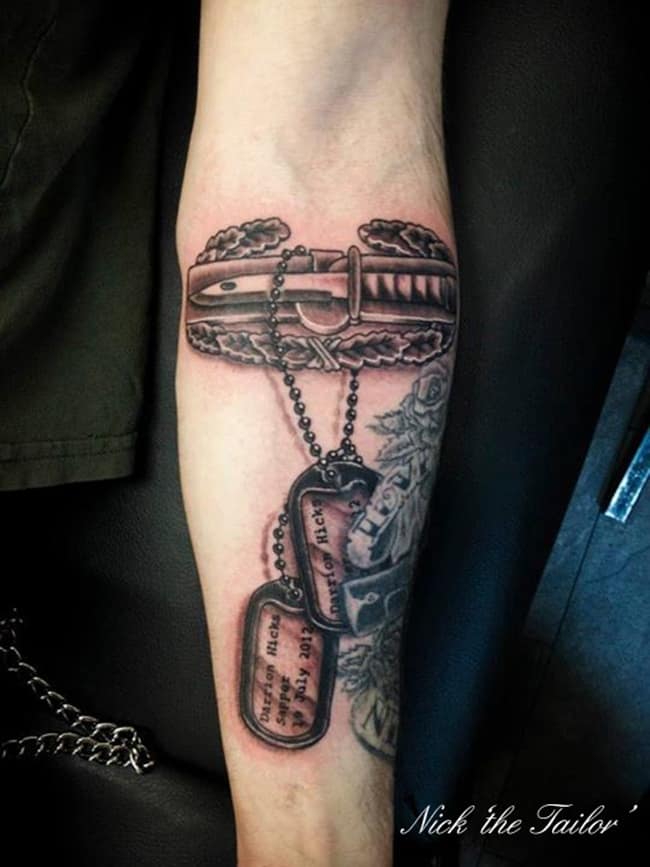 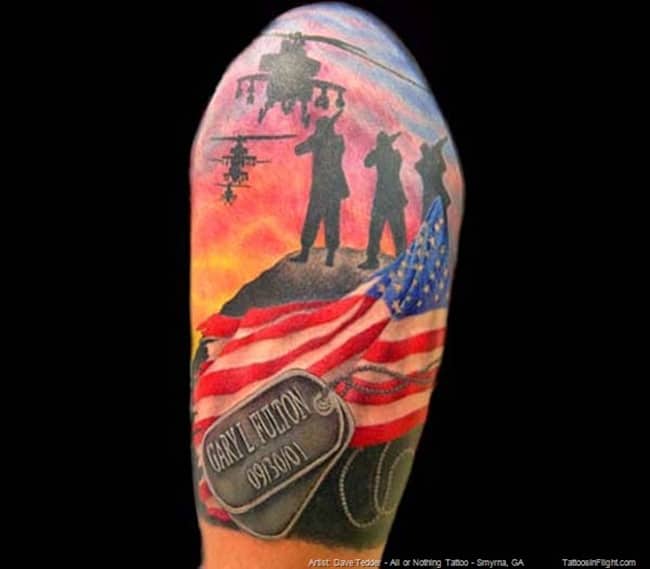 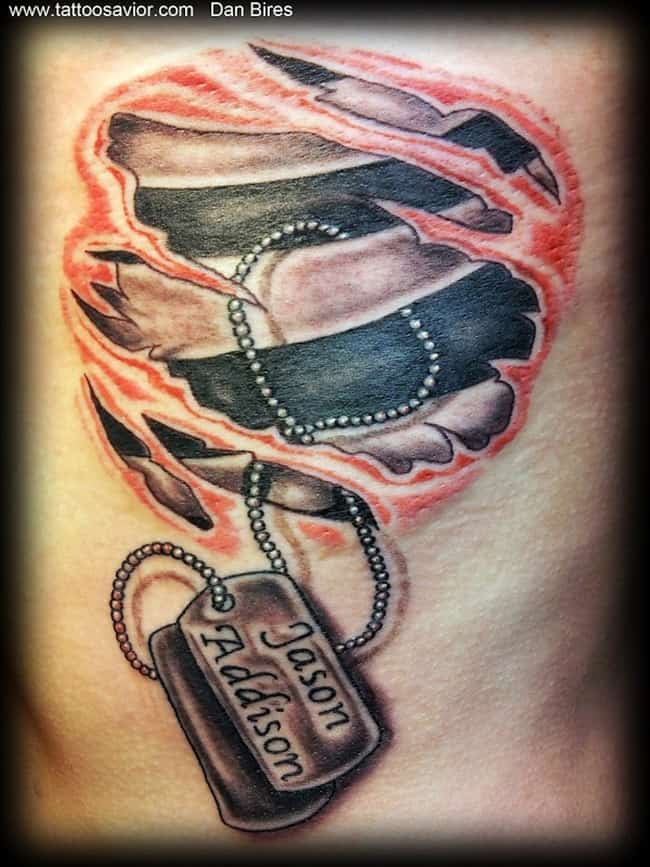 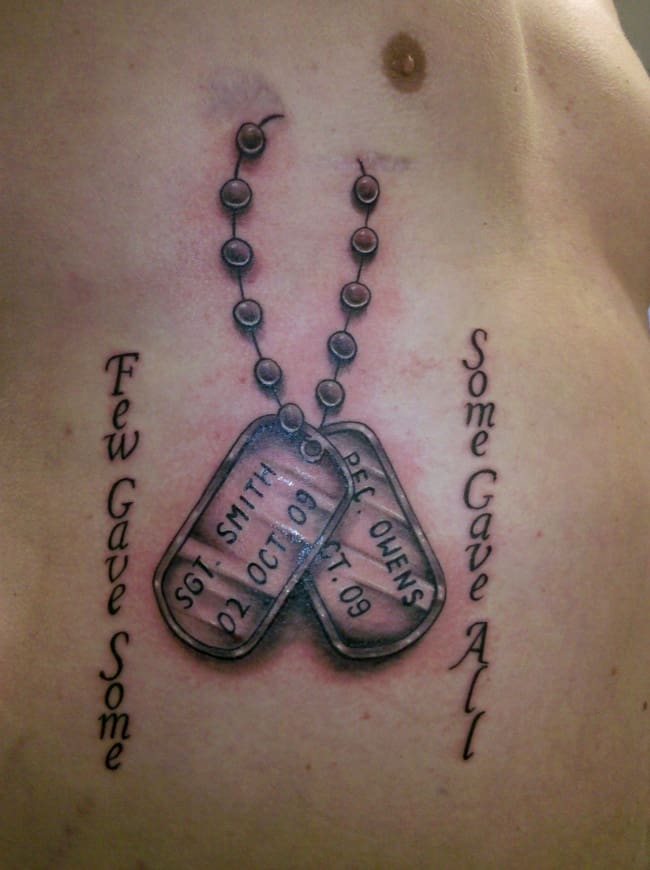 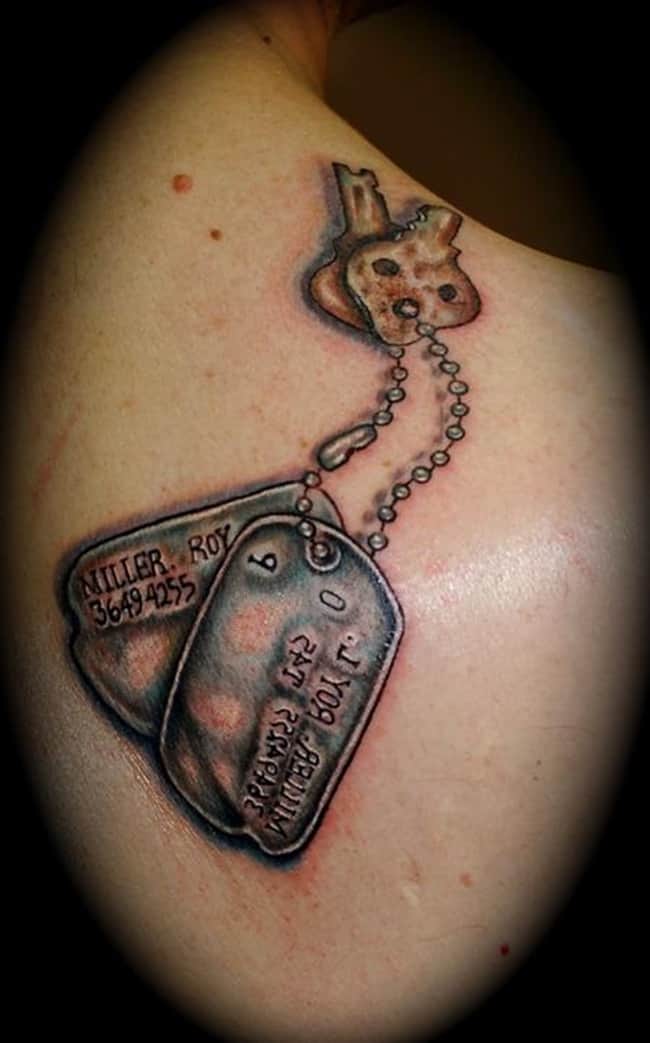 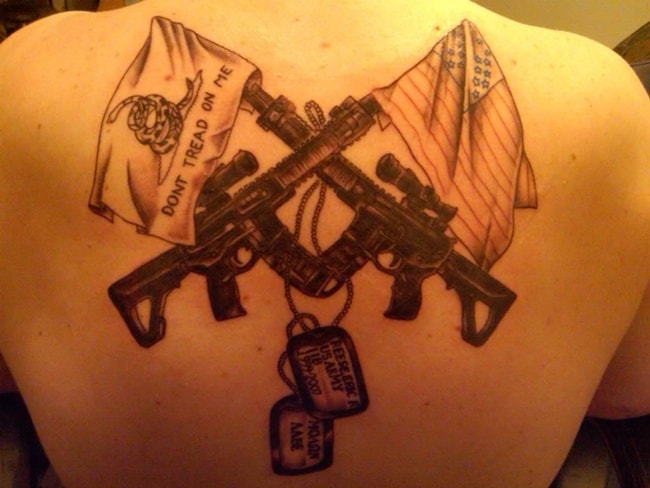 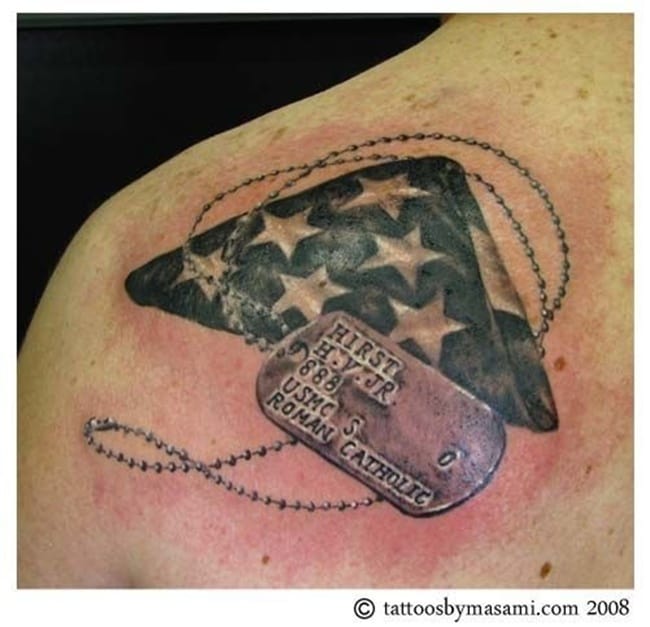 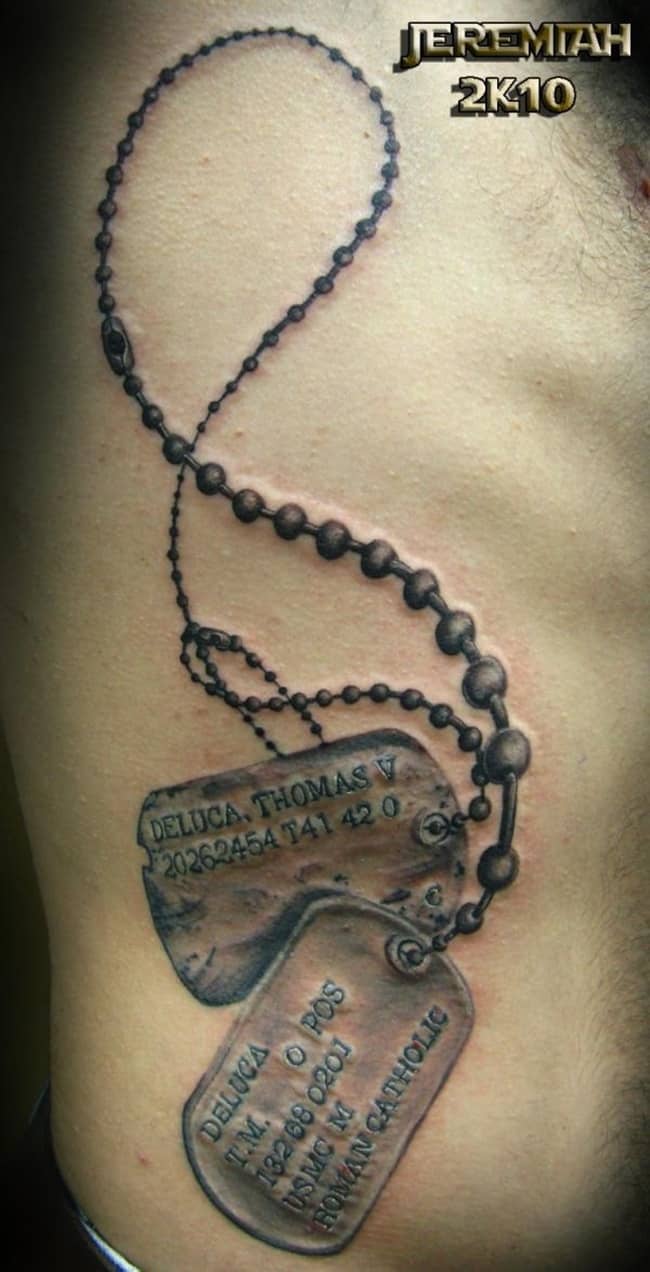 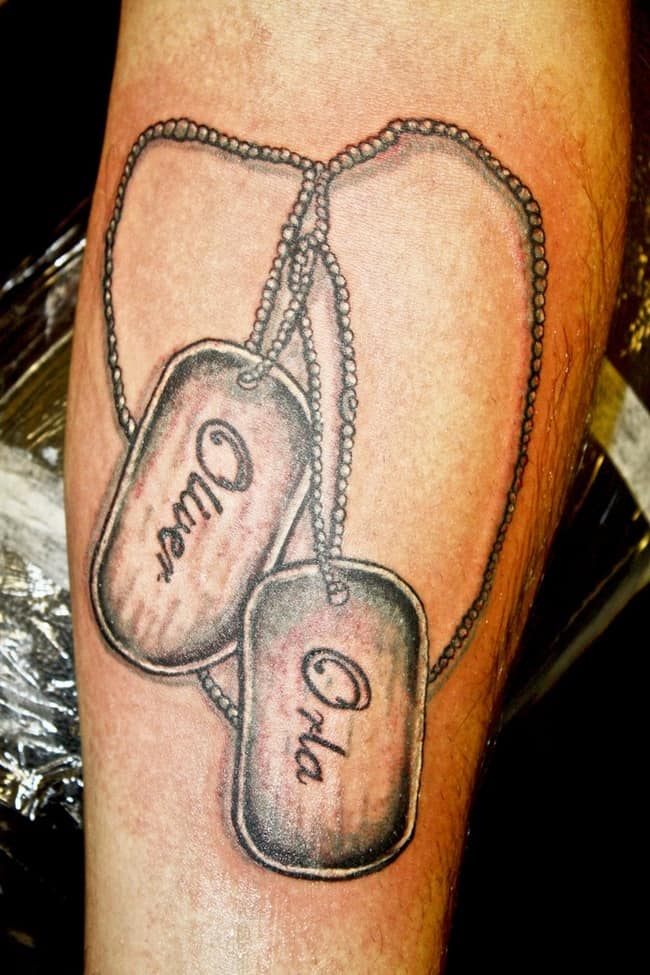 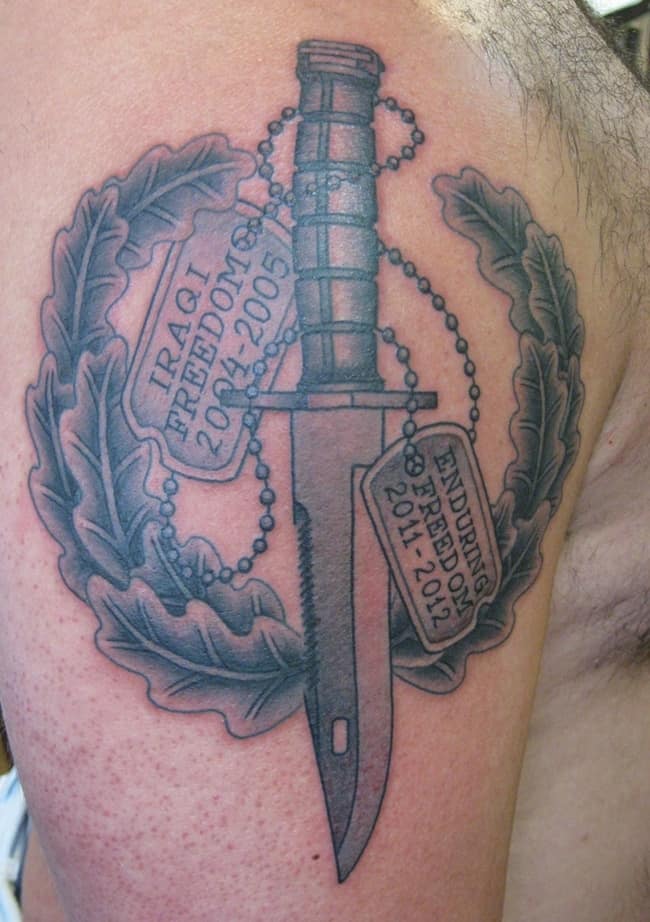 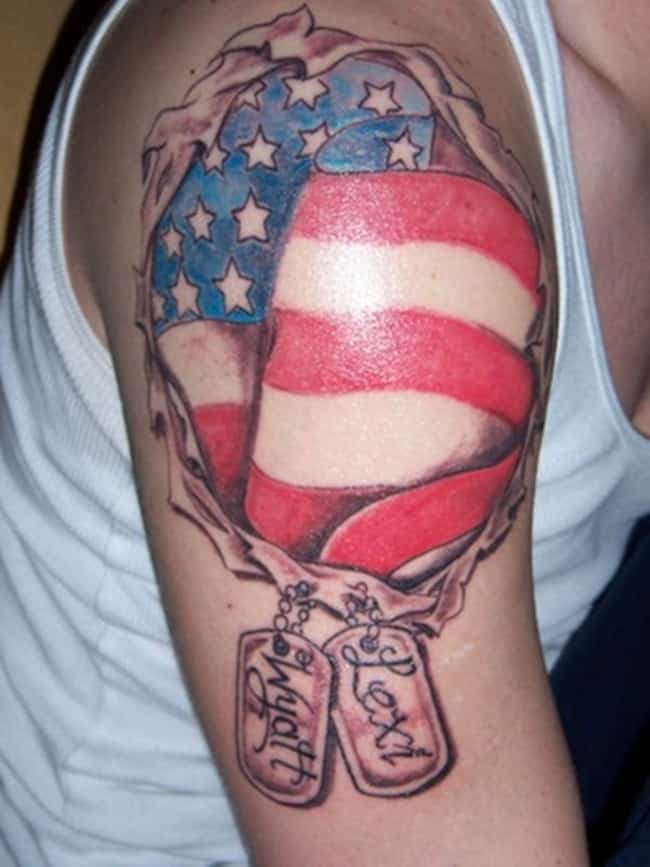 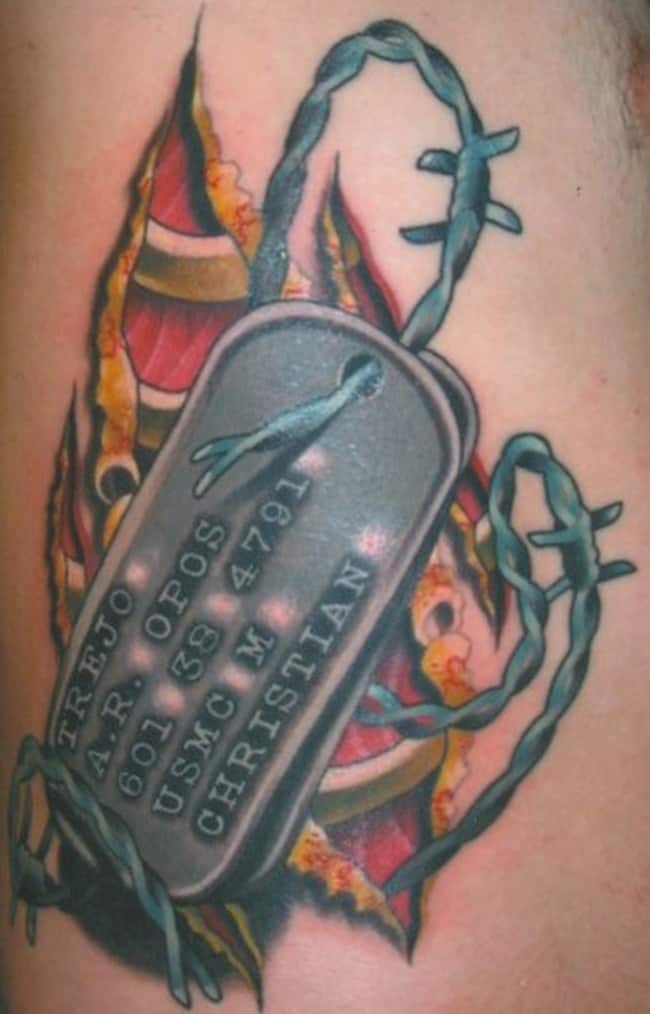