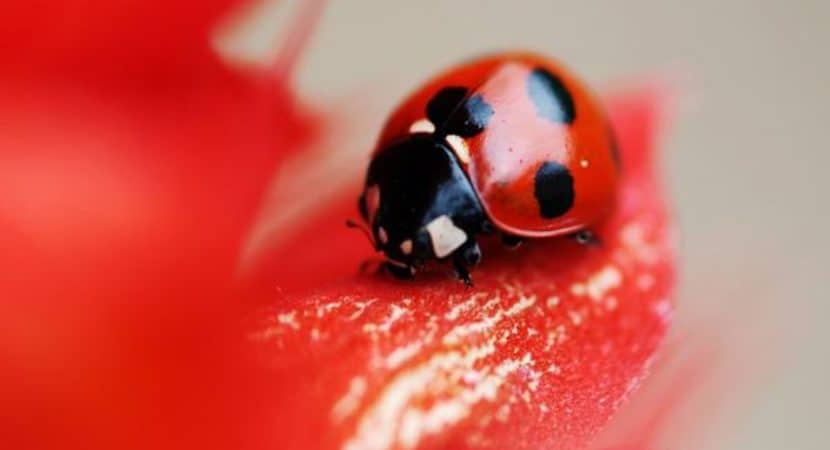 Red denotes passion, desire, energy, and love, so it probably isn’t a surprise that there are a ton of red animals. It also happens to be the color of courage, leadership, joy, and strength, thus making it a popular color of representation.

The power of the color red has even shaped our views of red animals. These animals and their varying shades of red, from crimson and burnt orange to rusty red hues, just capture our attention like no other. Nonetheless, red isn’t an uncommon color in animals; you can see it in several species of shrimp and in places off the coast of Costa Rica and Christmas Island.

So, today we are going to discuss 20 of these beautifully created red animals, some of which are as pretty as they are terrifying.

20 of the Most Interesting Red Animals in the World

There’s no denying red animals are beautiful, but also keep in mind that some of them can be deadly, as our list will show you.

This is a beautiful animal type common to the frog nation. Tomato frogs are endemic to Madagascar. The females have bright red and orange to bright dark red coats and the males have a duller orange hue on their bodies.

As far as red animals go, these might not be the most beautiful, but they’re definitely among the rarest. 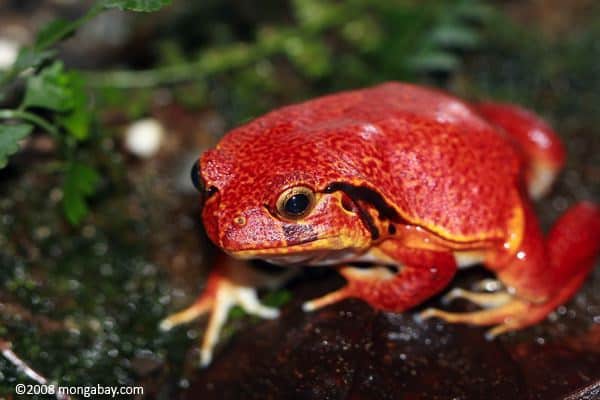 The red ladybug or lady beetle is a natural enemy of many insects, which you can usually find crawling on rocks and plants. Their oval-shaped bodies can have many colors, from Yellow and pink to red and black.

Red colored beetles are so terrifyingly beautiful that they often discourage other animals from coming to them. Their bright color is what makes them a beautiful terror! 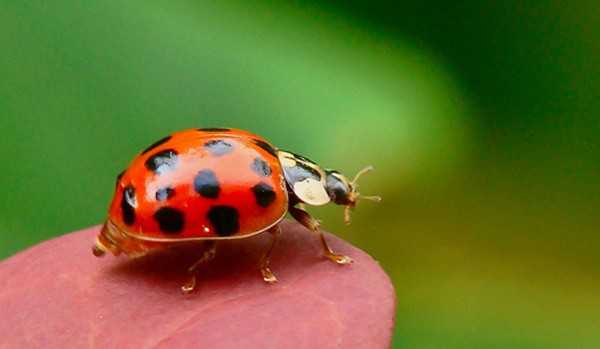 Inhabiting tropical South America and Caribbean islands, this red-colored bird is a must-mention on this list. It is also one of the two national birds of Trinidad and Tobago. The red prince is, indeed, a beautiful bird! It’s also among the many red animals it won’t hurt to stare at all day. 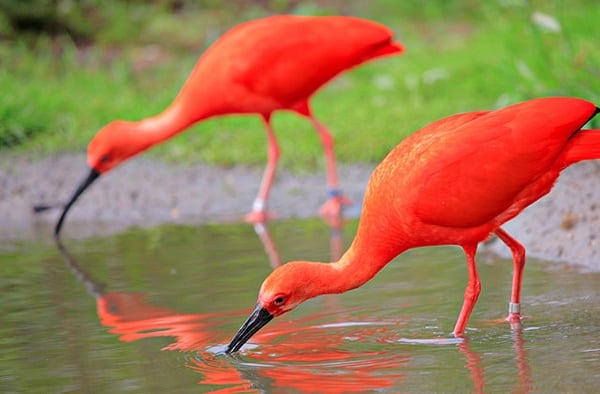 It’s not just the cherry shrimp you have to watch out for because the red sea star can also give it a run for its money. This lonely living red Starfish has various shades of reds in its body and often has patterns of animal color consisting of red and black.

They also carry red and black dots all over their body, which gives them a prominent look. Surprisingly, they have neither blood nor brain yet have the ability to reproduce lost arms. That’s beauty without brains for you! 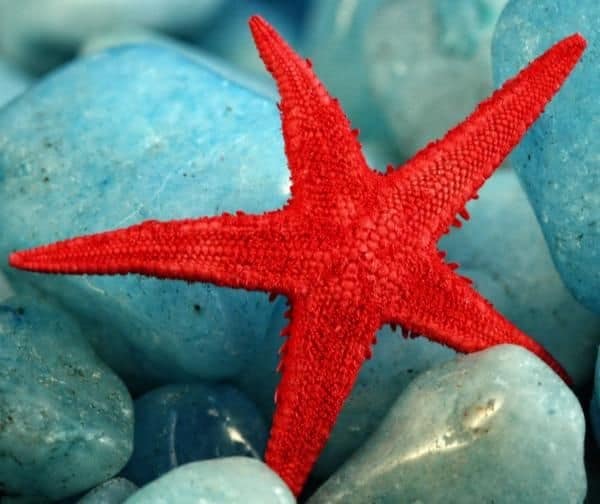 They are often named as the “Red Devils”. Their rusty-red appearance and angry attitude are enough to produce fear in your mind. They can grow up to seven feet and have the ability to rip their prey apart with their parrot-like beak and needle-sharp teeth.

Here’s Another beauty in red. This North American Redbird is a songbird, with the male of its species having fiery red bodies and the females having only olive grey feathers. 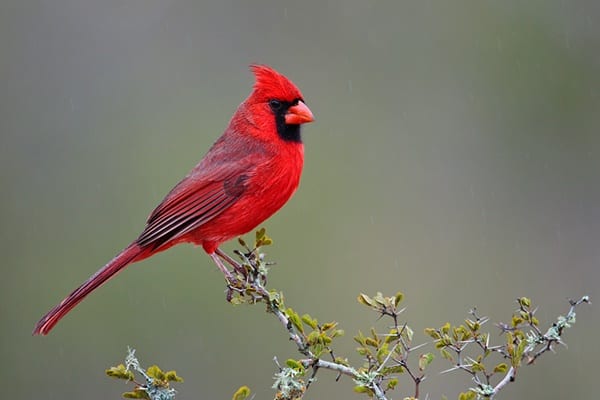 These newts are common in Eastern North America and do not possess the bright red color in every stage of their life. These amphibians turn a fantastic red-orange color during their juvenile stage. 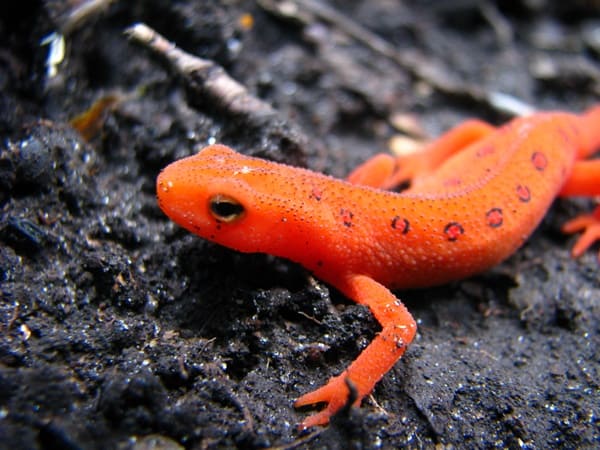 There are a number of snakes that hold some shade of red, but the red isn’t strong enough to be incorporated in their names. Though there are some whose reds are significant enough such as the Red Racer, Red Coachwhip, and English Red Snake. 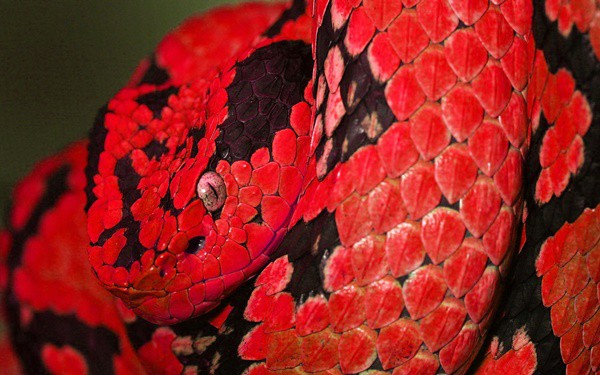 This red colored dragonfly can be found in India. Its brownish red wings have ash tips at the ends. Winged red animals are always a joy to behold and this one is no exception. 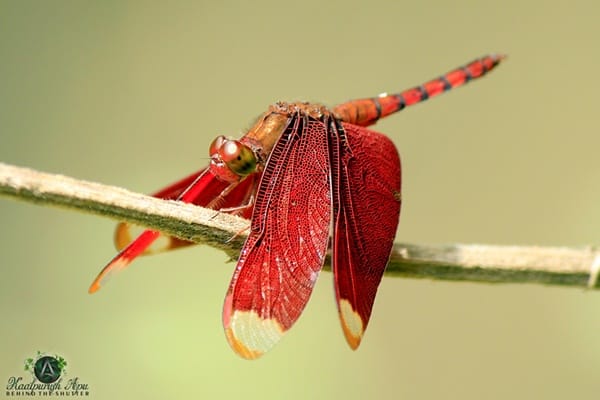 This is a brilliant red butterfly with black scattered spots on its body. It is mainly found in South Asian countries including India. 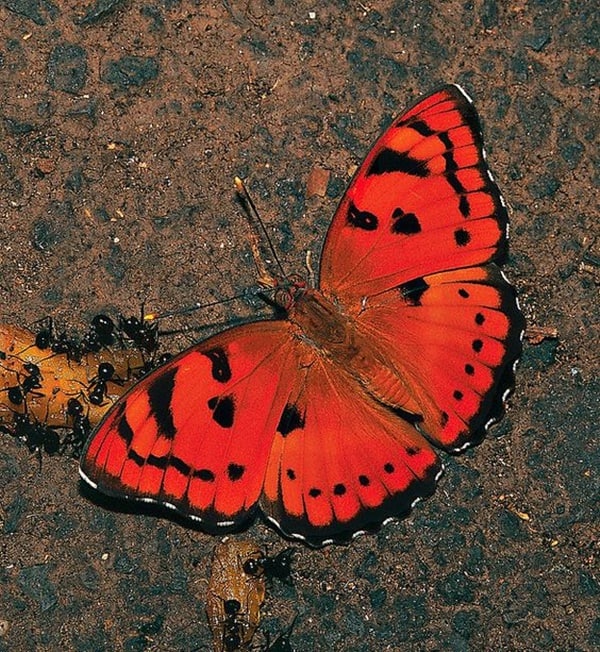 This arboreal omnivore is a tree squirrel with red furs all over its body. It is one of the numerous animals in red found in Eurasia. 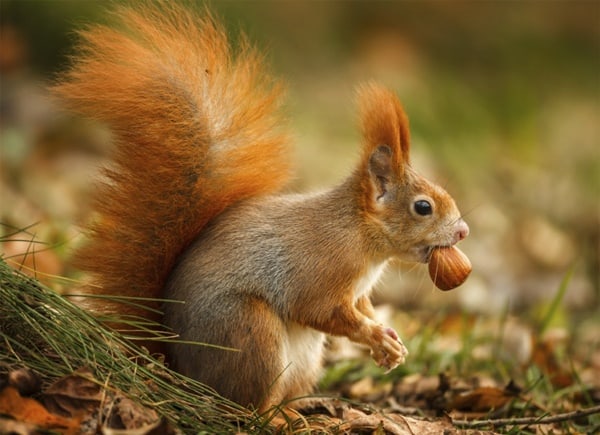 Tabby cats are those specific cats which have distinctive striped or dotted coats with an ‘M’ pattern on the forehead. Red tabby cats are beautifully created cute cats that have unique coats. They also make great pets! 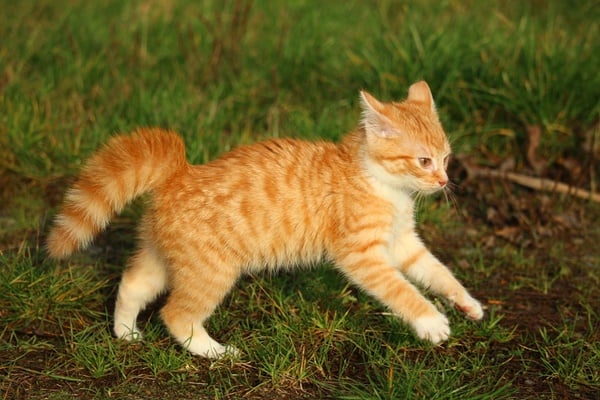 The Red Kangaroo is the largest kangaroo in the world. This largest mammal of Australia is also the largest surviving marsupial. 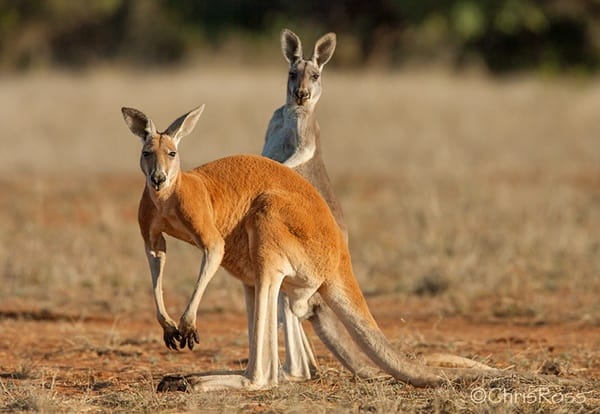 Red Velvet Termites are arachnids found in soils. They come in cochineal color, which makes them even more terrifying parasites. 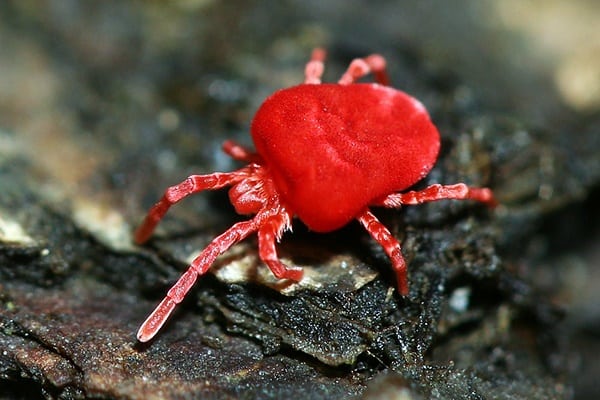 This is a red-colored amphipod that has no carapace and has a laterally compressed body. 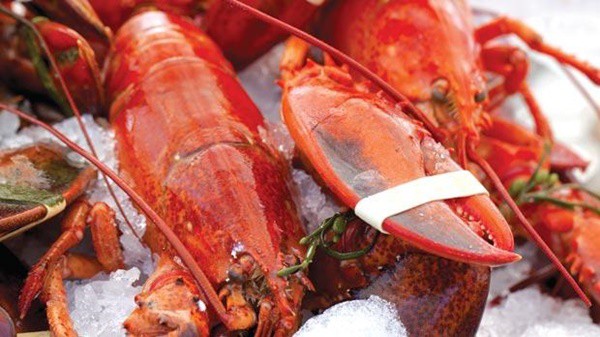 This unique species belongs to the Tiger Salamander family and can be found in Mexico in Central America. This baby can regenerate almost all of its body parts. 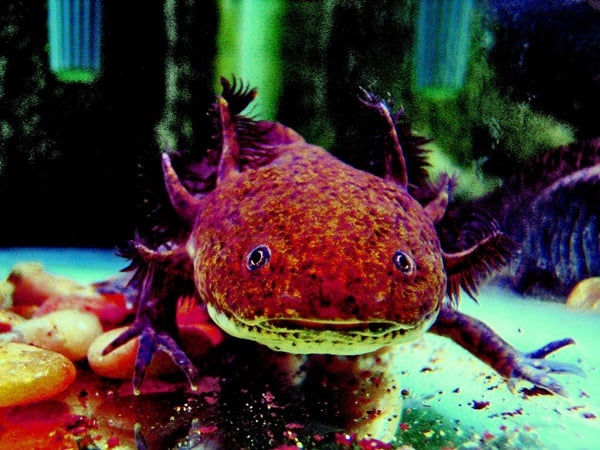 This simple breed of Deerhound is mainly bred to hunt Red Deer through coursing. 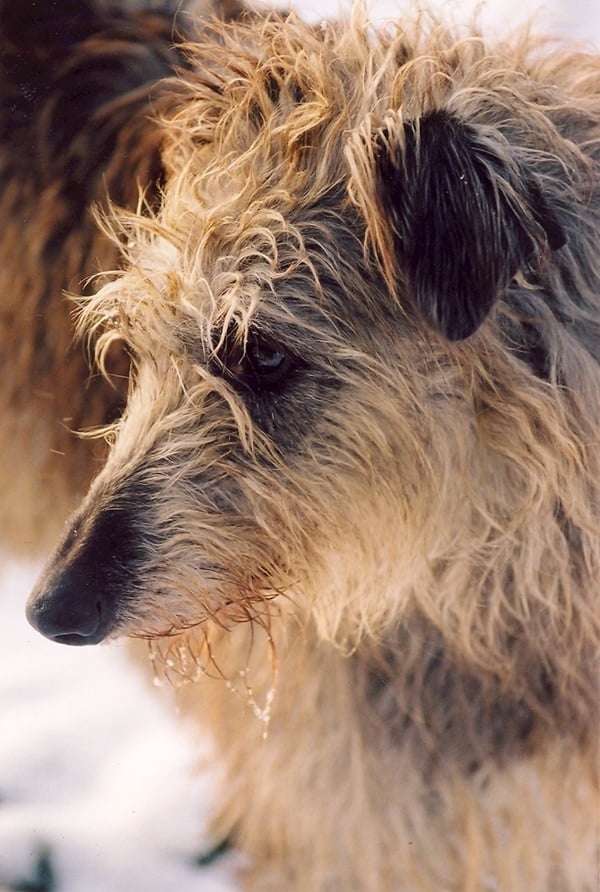 This fish is native to the temperate part of the Northwest Pacific, including Japan and South Korea. This red-colored animal is just 30 cm long. 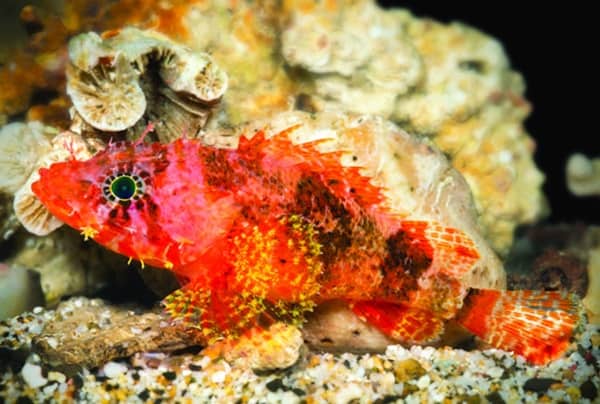 This red-hued animal is mainly found in the tropical seas and can grow up to 50.7 cm in length. 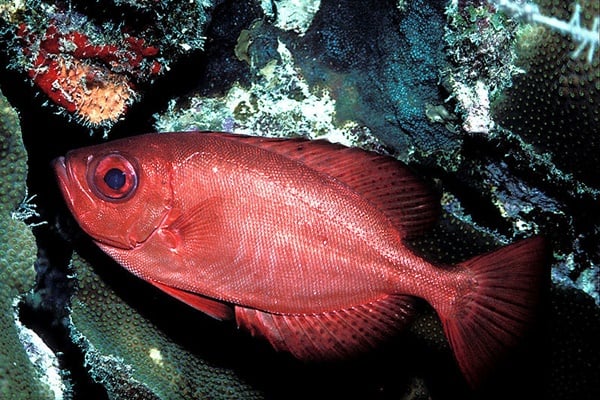 Last on our list of stunning red animals is this red insect that is mainly found in the buds, leaves, and flowers of lilies from which they are so named. 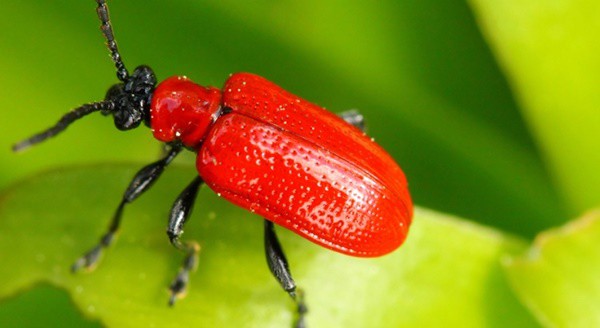 Why Are So Many Deep-Sea Animals Red in Color?

Why is it that the dominant color when it comes to animals in the ocean is red? There must be something in the water that makes these animals crimson. The truth is, deep in the water, fish and other animals are not that visible, which is why they are either red or black. Both black and red absorb all available wavelengths of color, resulting in their predominance at that depth.

Near the ocean surface, the color blue and other bright colors penetrate best and you will rarely ever see the black color. On the other hand, crimson colors can be seen at all depths. Anywhere deeper than midwater is simply no place for blue-colored animals, as their brightness makes them an easy target for predators.

What Animals Have Red Fur?

Red-haired animals just hit you right in the feels. Here are some creatures covered in the most gorgeous crimson fur:

Red sometimes seems like an inhuman color among some animals. These creatures carry the color so well that you can’t help but be amazed. From the Capybaras of South America to the gorgeous foxes of North America, there’s an astounding number of red-furred creatures that will just take your breath away.

There’s just something about red fur that captures your eyes more than red-colored fish scales. Though, they’re about on par with the red national bird of the south.

Why Are Some Animals Red?

An animal’s color is dependent on its way of life and habitat. Red on an animal is also different from red on a plant. In the same vein, red can also have a different function on a predator as it does on prey animals. For prey, red can be for warding off predators and protecting against sunlight, while for a predator, it can be for luring in a mate or a prey.

For a butterfly, red can be for several different things at once, including attracting a mate and warding off predators. Sometimes the color crimson has to be arranged in a particular pattern that spells danger before it deters a trespassing animal.

The Color Red in Nature

Red is one of the most vibrant and bold colors and red-coloured animals are among the most beautiful representations of it. They are no doubt one of nature’s most exquisitely crafted creations. Nevertheless, while they are delightful to look at, you should still keep your distance from most of them.

That’s because even though red represents beauty, it also represents danger. In short, it’s basically telling you to look but not touch. We say it’s in your best interest to follow that advice more often than not. Red is striking to the eyes, sure, but you don’t want it striking you anywhere else.