It’s very interesting that there are about 4500 species of crabs all over the world. They are one of the ancient creatures on this earth proving their existence for over 200 million years ago. These creatures are mainly found in the coastal areas and are known to be omnivores. Depending upon various species they vary in size. They are also noticed by the scientists to feel and remember the pain.

Consumption of crabs in different ways is common all over the world. Various dishes are made from crabs. Their meats are said to be very tasty. But the preparation varies from place to place. Several industries have been formed for fishing crabs. Among them, Japan, France, Spain, Hong-Kong, USA, Canada, and Portugal are very popular for consumption of crabs.

Crabs are typically seen to walk and swim sideways because of their articulation of legs. Some of the species really swim very well. They are very active in nature and communicate through complex behavioral patterns. They mainly hide themselves by digging holes in the sand and are seen to work together for finding food and shelter for the family.

Leaving all these factors there are many short amazing facts about crabs. Let’s go through that.

1. Crabs can live on land as long as they can keep their gills moist. This is probably the main reason for which they live near the shores. 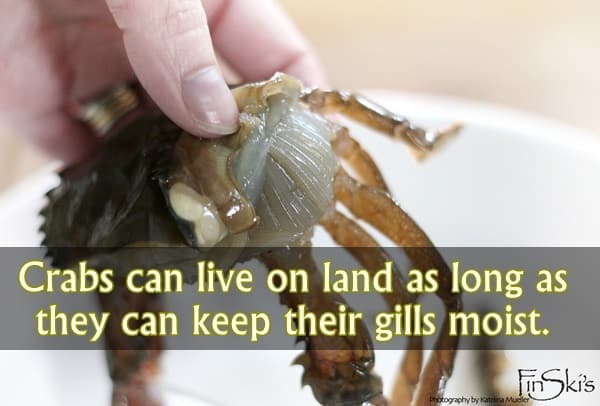 2. Fiddler crabs have a single large claw on one side, which they raise in action that looks similar to that of a person waving. 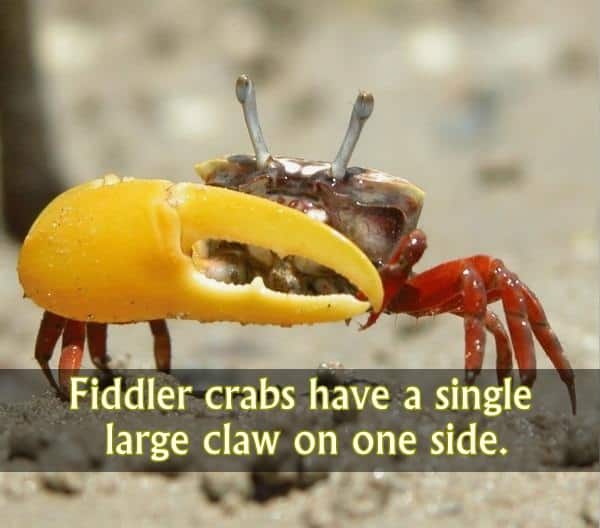 3. Japanese spider crabs are said to be the oldest crab in the world. 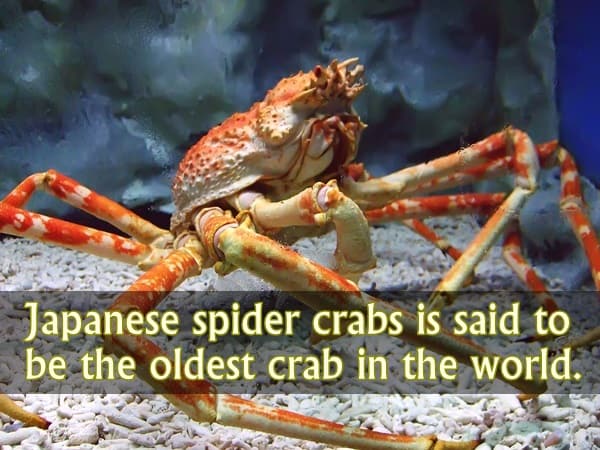 4. Crabs are also known as decapods because of their 10 legs. The first pair is called chelae. 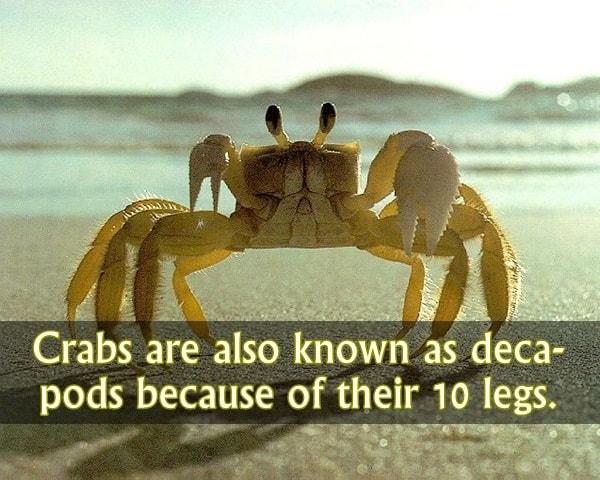 5. Their eyes are not very powerful but can distinguish colors. Like the other animals eyes their eyes are located on their stalks almost like snails. 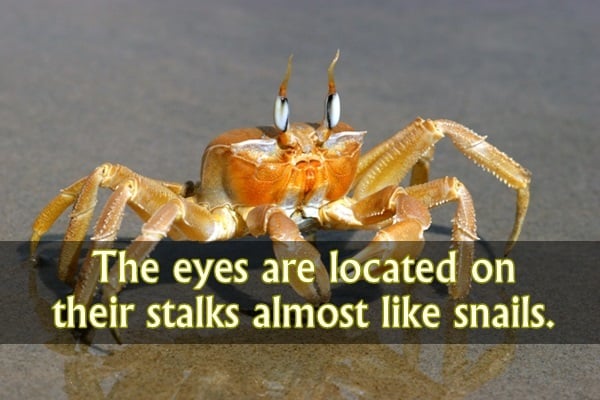 6. Crabs have external skeleton which is also known as ‘Exo- Skeleton’. This provides a protection to them. 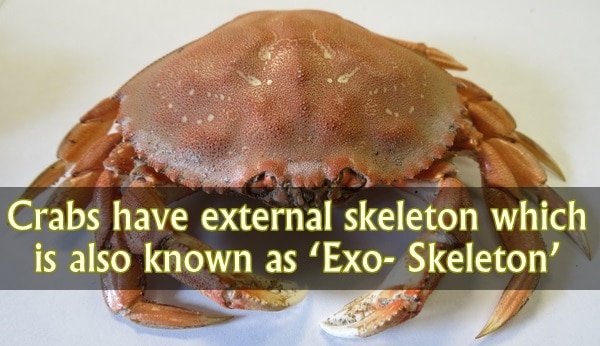 7. The collective names of crabs are ‘cast’. 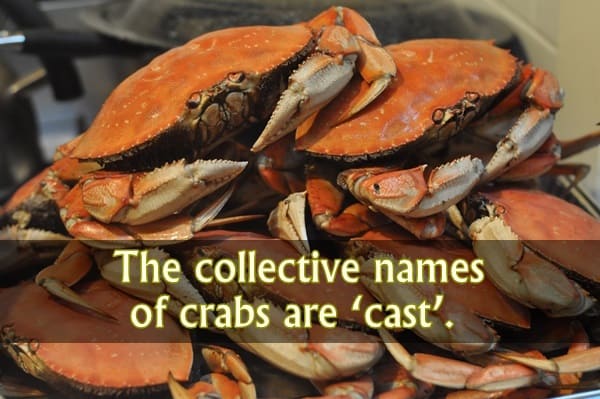 8. Average estimated life span of a crab is 3-4 years. 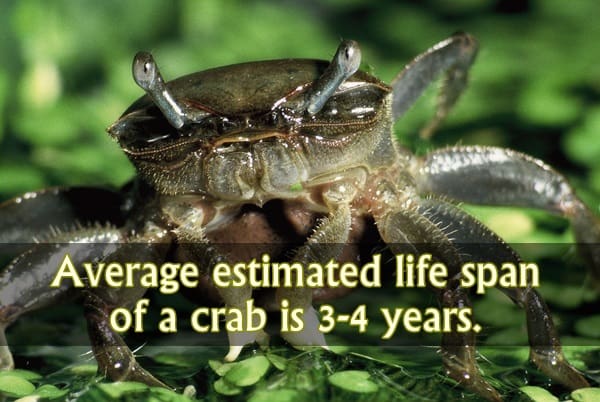 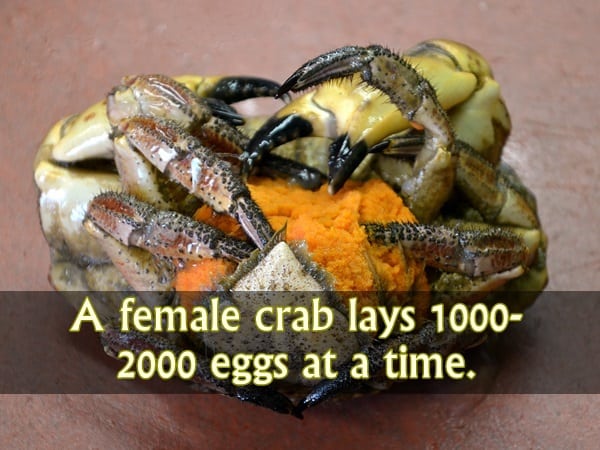 10. The sex of crab can be determined by looking underneath its shell. The males have phallic exterior while the females have domes. 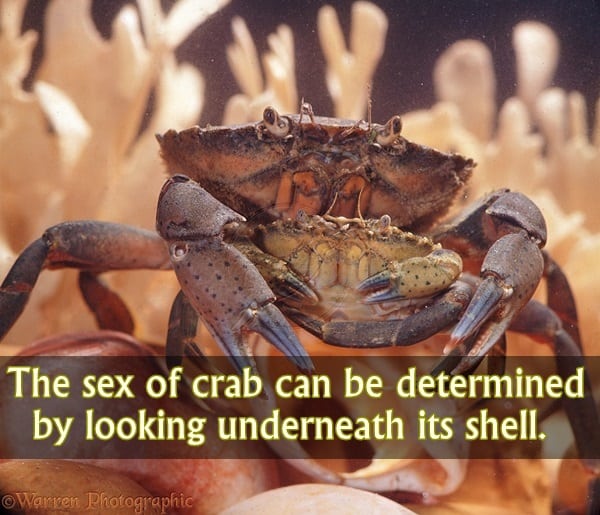 11. The largest consumed crabs all over the world are horse crab and Japanese blue crab. 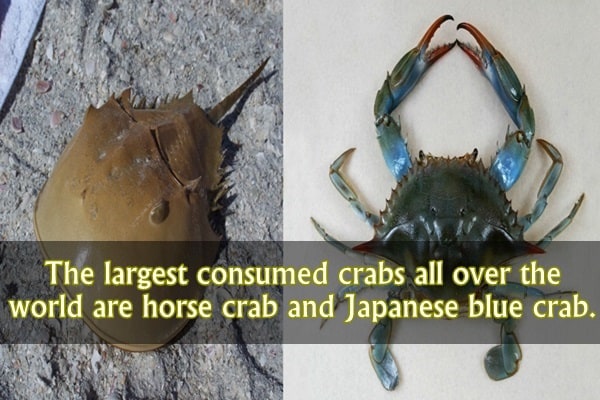 12. The most colourful crab in this world is the Sally Light foot Crab. It is seen with red, orange, yellow and white. 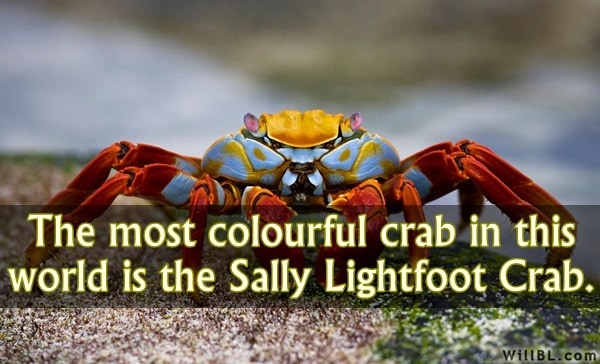 13. As the crabs are said to be decapods, some crabs like King Crabs, Horse Shoe Crabs, Hermit Crabs and porcelain Crabs are not regarded as true crabs because of their non-decapods nature. 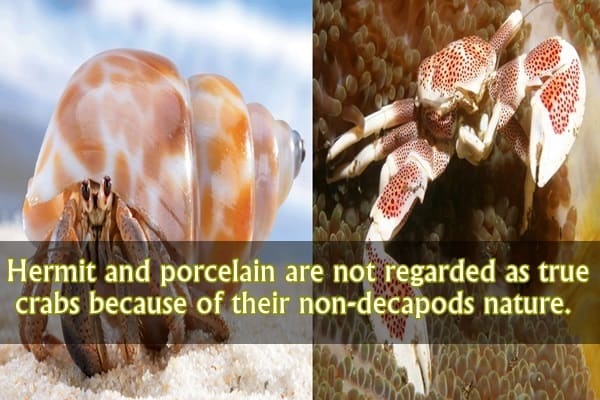 14. The tooth of a crab is interestingly situated in their stomach. 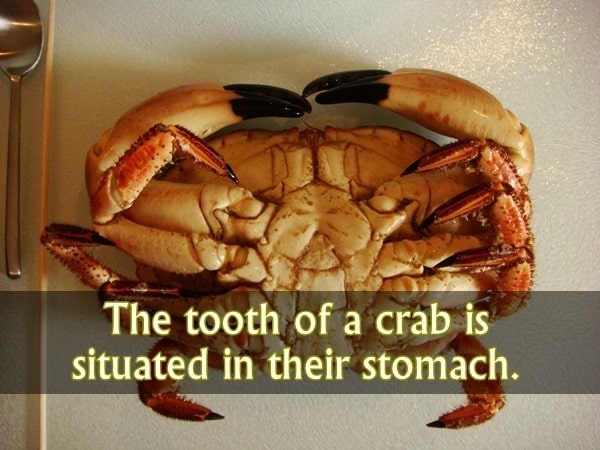 15. The crabs can grow back their claws after losing it. So, in some species, for human consumption their claws are manually squeezed and pulled off returning the live crab in water. 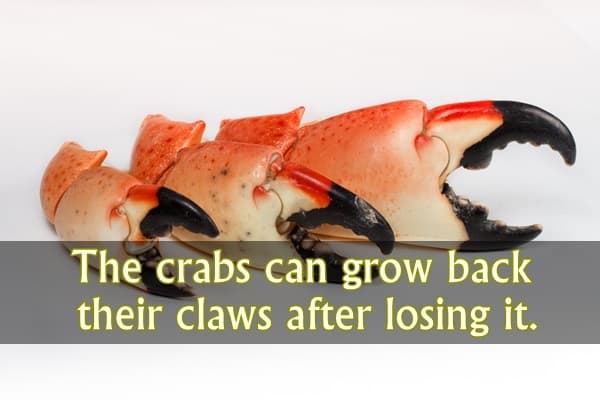 So it can be concluded that they are one of the most ancient and amazing creatures persisting in earth. They are very often dangerous to humans making severe attacks. Crabs are also symbolized as star sign ‘Cancer’. I Hope you will enjoy some interesting facts about crabs mention above.