Home
Birds
25 Interesting Zebra Finches Facts That Will Amaze You 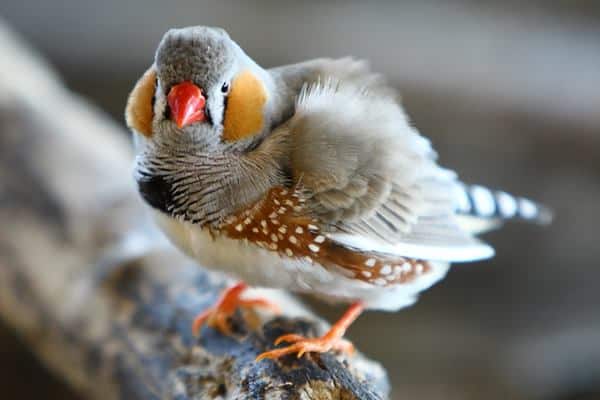 Zebra Finches are a popular bird found all over the Australian continent, except for the cool, moist south and the tropical far north. Aside from Central Australia, these attractive birds are native to Indonesia and East Timor. They are mainly grass seed eaters. And because they are soothing singers, they are fun to have in your home too.

If you are interested in different bird species and beautiful birds always attract your attention, then go through this article. Many interesting facts about these beautiful Zebra Finches are waiting for you. Go through them all, and you may end up bringing a pair home too.

Most Interesting Facts About Zebra Finches

For more than a century, these birds have been among the most popular caged birds across many countries. They are mainly grass seed eaters, but what else do we know about them? Here are 25 interesting facts about Zebra Finches:

You may wonder why a bird is named “zebra.” There is obviously a reason for that. The small chest of this cute bird features black and white stripes like zebras. Its barred tail is often colored black and white too.

As with other birds in the animal kingdom, the males also feature a burst of colors. Often, you will find them in a mix of brown, white, black, gray, and orange. The females, on the other hand, are uniformly gray.

3. They are the fastest maturing birds in the world.

Oh! This tiny bird has one big record against its name. They are the fastest maturing bird. They are able to breed from the age of only 70 to 80 days. After the breeding season, a baby bird will have grown and is ready to leave the nest in just about two months.

4. They are wonderful pets.

Zebra Finches are great company to the human beings and should be kept in pairs. They are well known for their cool temperament and often make such a good connection with their human host that they eat food directly from their master’s hand. 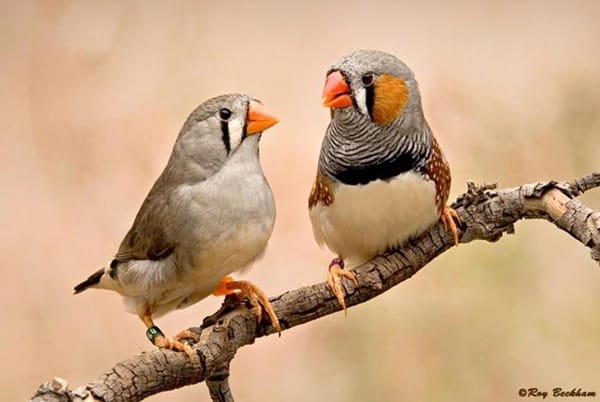 Finches are monogamous breeding pairs, which means they stay with one partner for their lifetime. They generally breed after ample rainfall, as there is abundance of water and food available afterward. Adult birds aged 70 to 80 days are ready to breed.

Before the mating and breeding season, you will find male birds dancing on the branches of trees to impress the female finches. They push their plumage outward to make their dance even more attractive.

7. They are small and tiny appearance.
Zebra Finches are one of the tiniest Finch species, but they are not the smallest. They only grow up to four inches long. Males and females are practically the same size, but you can easily distinguish them by looking at the color of their beaks.

8. They have a long lifespan.

These attractive birds can live around five to seven years when they are free and out in the wild. However, a captive Zebra finch will live longer, often surviving up to 10 to 15 years.

To increase their survival rate and prolong their life, you will want to give your Zebra Finch a companion. This way, you can be sure they remain emotionally and mentally stable. 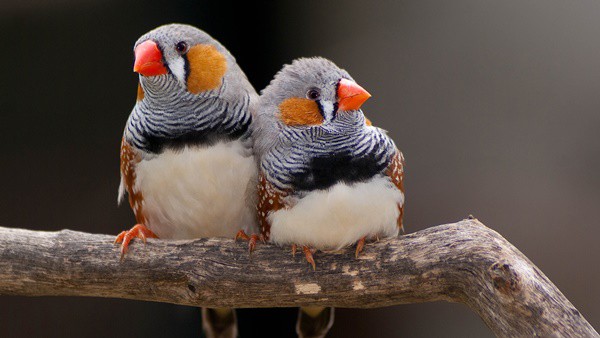 9. Both the male and female birds can sing.

Like other birds in the Finch species, these birds are singers too. All male birds sing differently, having their own song features that distinguish them from the rest.

Adult males sing to impress a potential mate so that they can continue their line. Pay attention to males, and you’ll notice that they are the ones that tend to be loud and noisy. While the female finches can sing, they are bad singers.

In the wild, big flocks of Zebra finch birds stay together. They enjoy plenty of social interactions so that they can be happy and healthy. Even a male and his female only separate when they have eggs in their nest.

While they like their human companions, they prefer spending most of their time interacting with fellow birds. They also don’t enjoy being held, which can frighten and stress them out. As such, do your best to touch them as little as possible.

11. Their beaks change colors as they mature.

The young birds have black beaks, which change into bright red or orange after one month. Before they mature, all male Zebra finches look like the females, save for their black beaks.

When they breed and have eggs in their nest, the male Finches become very protective. The males also produce a hissing noise to let others know they are ready to protect their mates and their territory.

13. They are untidy while eating.

Though they are very beautiful to look at, they can get very messy when they eat. If you ask us, that’s understandable, as they need to dehusk seeds to get to their food. Even so, you will often find them dropping seeds here and there.

Birds are known for their poor smelling capability. However, Zebra Finches are different. Although the brain of Zebra finches has smaller olfactory bulbs compared to other bird species, they actually use their sense of smell to locate and recognize their relatives. 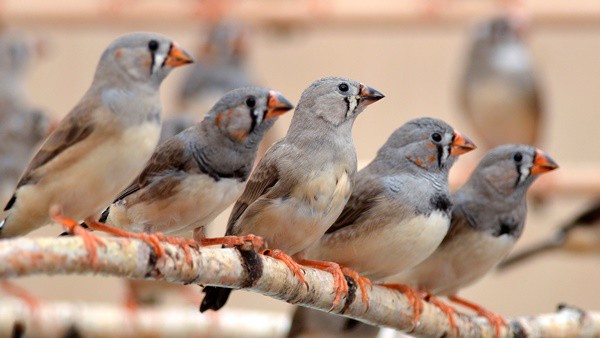 15. They have a huge contribution to the world of science.

This may be hard to believe, but, yes, this small bird has helped a lot when it comes to understanding how birds behave, how they sing and talk, and how they evolve. They even lent a hand in figuring out how the human brain works.

You will find Zebra Finches used in neurobehavioral studies where the focus is on auditory processing and song development.

16. Their diet consists mostly of seeds.

Wild Zebra Finches enjoy eating seeds from different plants and a diet with insects. They also regularly eat pine cones, weeds, and even berries. However, when they do, they almost always chew up the fruit only to get to its seed.

Though they love grass seeds, if you are planning to make them your pet, give them a balanced diet of calcium (boiled eggshell) and seeds. It will also help if you put their food on the cage’s floor so that they can still use their foraging skills.

A premium daily diet is especially important during the breeding season. Make sure you supplement their diet with insects, such as water fleas and moths.

This bird is a frequent water drinker, so make sure water is always available to them. They also enjoy a good bath once in a while. Hence, leave a couple of small bowls filled with water in their cage.

Because they have a small body, they can get dehydrated really fast. If you pay attention, they can drink up to 28% of their weight in water per day. Dehydrated birds can die if not given water for hours.

This bird does not like to live alone, so always house them in pairs even when they breed. If you find an uneven number of birds in the cage, make it even.

If you decide to keep two Zebra Finches of the same sex, do not put a nest or nests in their cage. This is to avoid fights, as these birds can be territorial.

19. They require occasional trimming of their nails.

If your pet finch has overgrown nails, bring it to an experienced bird groomer to have them trimmed. If you’re confident enough, you can try cutting them yourself using human nail clippers.

You will know your Zebra Finches need their nails trimmed when their feet don’t touch the ground when they are standing. Overgrown nails could curl around and cause them pain.

20. They are sociable in nature.

As they are social in nature, they create cacophony while they sing together. And since you’ll be keeping them in pairs, make sure you put them in a big enough cage for flight. 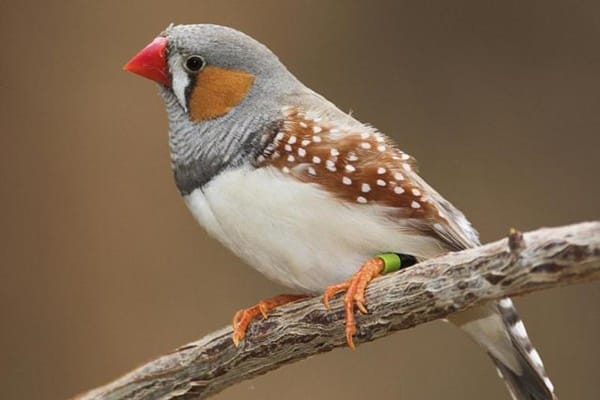 Finches are flight-loving birds and need a minimum of 20 inches of horizontal space to be accommodated. Putting them in a big enough flight cage allows them to exercise, play, and stay healthy overall.

You can also keep your Zebra Finches entertained by making sure they have plenty of perches on which they can hop. Since they are small birds, you will want to use natural wood or ropes.

23. They are an adaptive species.

This bird is very adaptive to new surroundings. However, they are mostly found in open areas with grasses and bushes. In fact, they are such an adaptive species that you will find them building their nests in urban cities and commercial establishments.

24. They learn to sing from their surroundings.

As they are adaptive in nature, they learn singing from nature itself so they are very popular as songbirds. A young male often learns singing by copying the song features of an older male Zebra Finch.

They can learn as many as two complex songs when still in the learning stage. However, they are often only able to produce a single song when they reach full maturity.

25. They are the second bird genome to be sequenced.

After chicken, Zebra Finches are the second bird species whose genome has been sequenced in the year 2008. Through this, researchers were able to gain insight into the evolutionary processes of birds in general.

For years, scientists all over the world have been interested in learning about this bird species. In particular, they wanted to study its brain function and how it can learn, memorize, and vocalize songs. 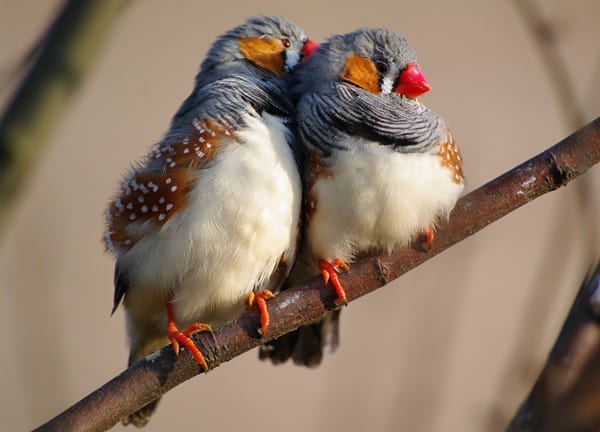 Zebra Finches are one of the loveliest creations of Mother Nature, with their serene beauty, soothing singing voice, and composed temperament. For this reason, it is not surprising why they are also among the most popular pet birds across many countries. They also require a minimal time commitment, so newbie bird owners will find them easy to care for.

To keep them happy and healthy, make sure you provide them with a premium daily diet, a water source where they can drink, and collections of water so that they can bathe a couple of times every week.