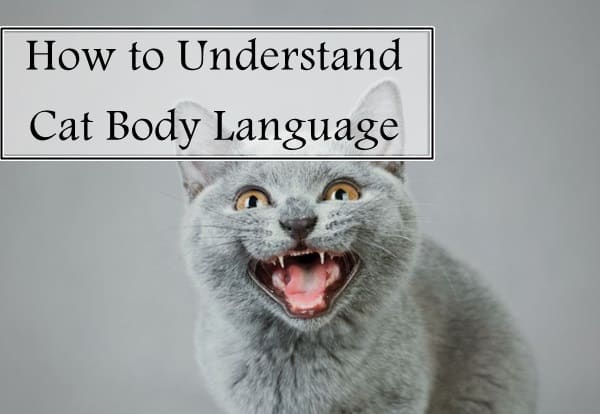 This article is quiet amazing in that sense as it will be giving you a lot of amazing facts today which probably you don’t knew before. At first some points will be very hard to believe and simultaneously it will sound interesting also. Cat’s ears are a junction of muscles. Can you believe that it contains about two dozen muscles which allow them to control their ear in different positions and even 180 degree swivel? And the ears are so powerful that it acts like radar searching for sound radiations. Firstly if you want to understand a cat’s body language, you will have to understand the signs of tails and ears. These two are the most important part by which they express their moods and body language.

How to Understand Cat Body Language : Tips and Guidelines

Alert and interested: when you cat is very alert about something and something has captured his interest. His ears will be in a straight up orientation and a forward posture as in figure. Even she will greet you with ears erect and offering you a friendly greeting.

Relaxed: This is the most normal sign of cat you will see all the time. Normally you will notice that the ears of cats will slightly be pointed side wards and slightly forward as displayed in the figure below. This posture mainly indicates contentment and sense of well being. This posture wall means that he is neither aggressive nor fearful and she is in a very relaxed position.

Signs of Aggression: At this time cats show some interesting signs. A cat’s ears when moving from a forward posture to a backward posture indicates increased aggression. Again a cat’s ears moving from an upright position to a full horizontal position indicates increased fear, annoyance and signs of submission. At this point he is probably telling you to leave him alone. But if you notice that your cat’s ears are always in a horizontal position, there is a chance of having an ear infection or ear mites, so immediately your duty is to rush to the veterinarian.

Ambivalent: Do you know that cat’s ears can move independently of one another? When they will be in different positions, sometimes they become unsure of how to respond with their ears. They become ambivalent. Their ears may shift as they interpret stimuli and consider how to react.

Nervous: If your cat’s ears are twitching, think that she’s nervous. See that in the below image. This is sign that she symbolizes the cue to offer her assurance and safe place. But remember persistent twitching may be a sign of medical problems.

Attack Mode: When the ears flatten against the head then it’s time to think that your cat has got frightened and now he may attack for self defense. The ears fully touches against the head and this protects their ears from teeth and claws while fighting. So you should always keep in mind that this position is very dangerous and aggressive. Understanding this posture can save you from injury. So never ever try to touch them when you cat’s ears are tilted back. And there is nothing to tell you that the injuries done by cats are too much dangerous.

Now it’s time to understand the signs of their tail. You read earlier that tail also play a major role in expressing their body language. So first of all you will notice that one of the most common movements is back and forth swish sometimes it is also called as sword tail. But this swishing is a not a good sign. This means that the cat is in a mood of attack. So it is very risky to hold them at this time. Who knows that the attack is being planned on you? Also please don’t try to mess with your cat when his tail is in defensive aggression. In this case the tail is lowered fully but the tail tip is curved a bit upward. This means that something has attracted her attention. Maybe she is nervous, defensive or unsure of her surroundings.

According to All Animal Websites, when your cat is happy, he holds his tail upwards and will greet you with his tail quivering. That means he is very happy to get you and this is probably the best time to shower her with your affection. 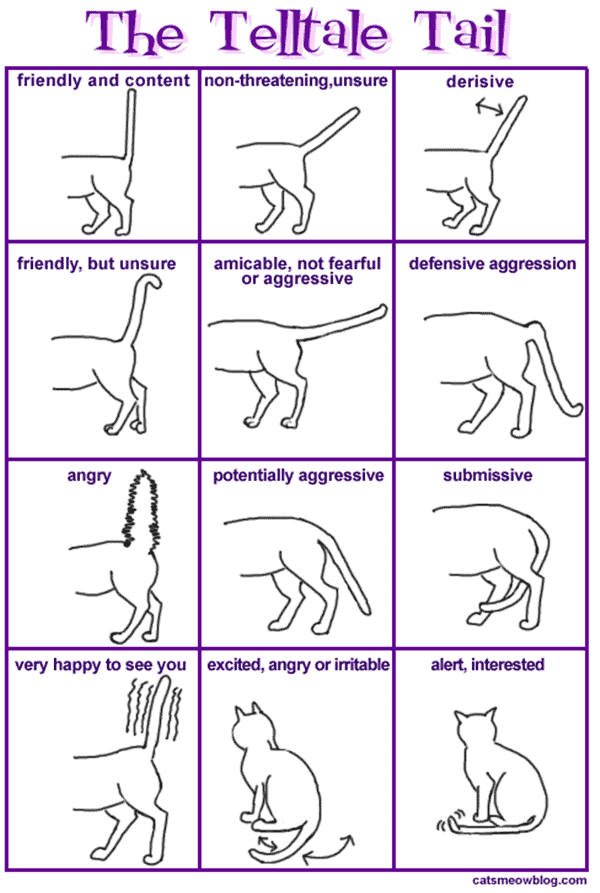 So if you are now planning to bring a new cat in your home, it’s better to read your cat’s tail language. It’s necessary to understand if you want to break up fights before they start. Even when cats are asleep, they will use their tail. You will notice their tail moving while they are asleep. God knows what the meaning of that is, probably it’s a sign for ‘do not disturb’ while they are asleep.