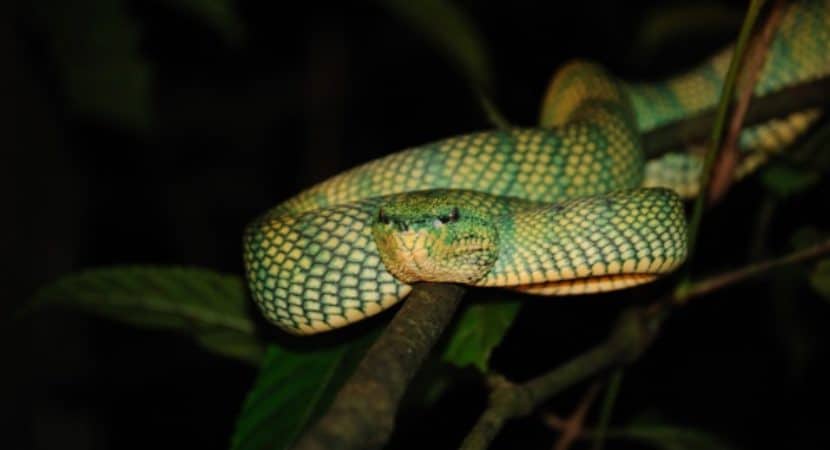 Tropical Evergreen Forest found near the equator, occupy around 7% of the Earth’s surface. The optimum biome of Tropical Evergreen Forest is characterized by heavy rainfall throughout the year and worldwide known for their diversity of flora and fauna. Sun shines for almost 12 hours a day and average temperature remains constant between 20-28 degree and the average annual rainfall of most of the areas of the tropical evergreen rainforest is about 2000 mm or even more. 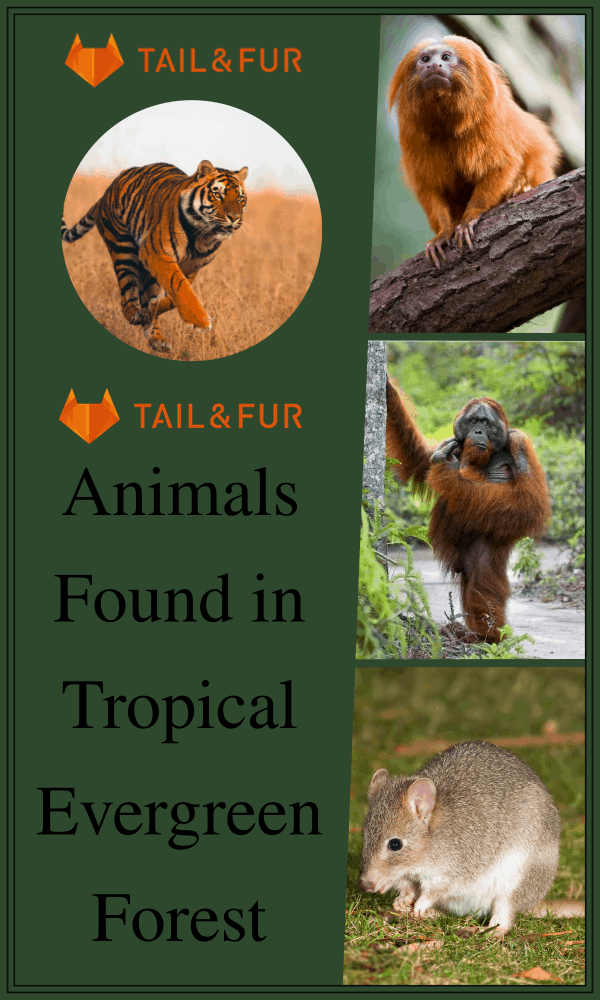 The difference between the lengths of day and night throughout the year is very little. The broadleaf evergreen forest is found in China, India, Lebanon, Morocco, North America. Here is the list of top 10 animals found in Tropical Evergreen Forest. 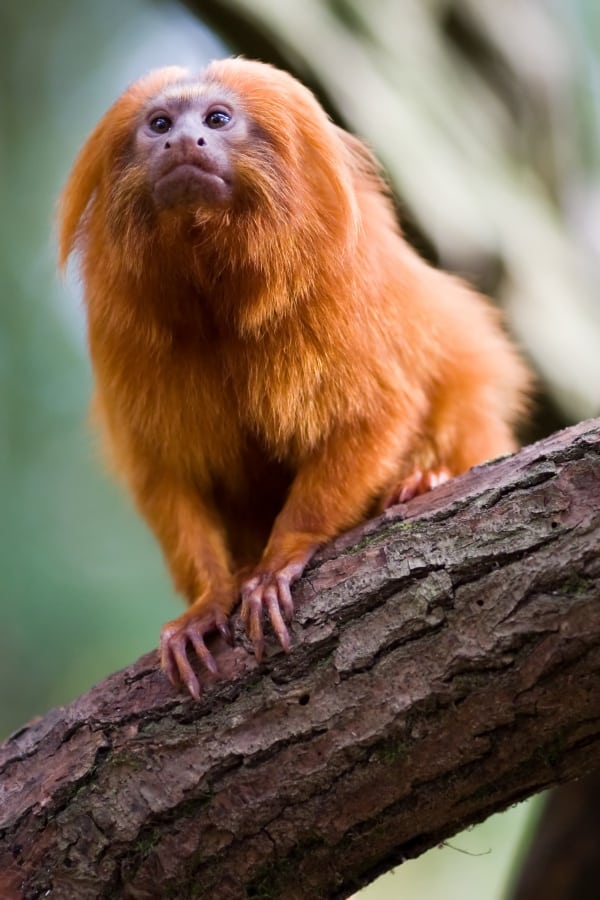 Golden Lion tamarins get their name from their impressive manes, thick rings of hair reminiscent of the great cats. Its abundant golden hair frames their black face and covers the body and tail. Golden lion tamarin lives in the trees. They sleep in the hollows at night and hunt during the daytime while hogging from branch to branch. Long fingers help them stay firm in the branches and catch insects, fruit, and birds. They usually form social family groups and male tamarins like to raise their offsprings which are born as twins and These animals carry babies on their back. Family sharing is very important in Golden-lion. They are classified as endangered by the IUCN. 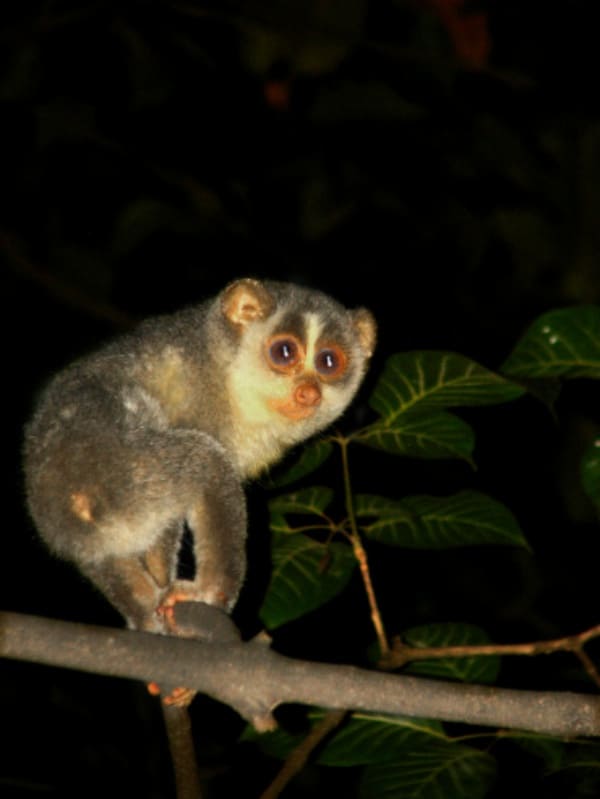 Slender Loris is most amazing animals on earth. The Slender Loris is a small, nocturnal animal who prefers to inhabit in thick bushes and trees where it can evade predators and also find insects to eat. They spend most of their lives in trees traveling along the branches. Slender Loris is found in India and Sri Lanka. They are very active during the night and feed on insects, fruits, and lizards. They have a habit of washing their face and limbs with its urine in order to defend from the sting of the toxic insects. They are listed as Endangered by the IUCN. 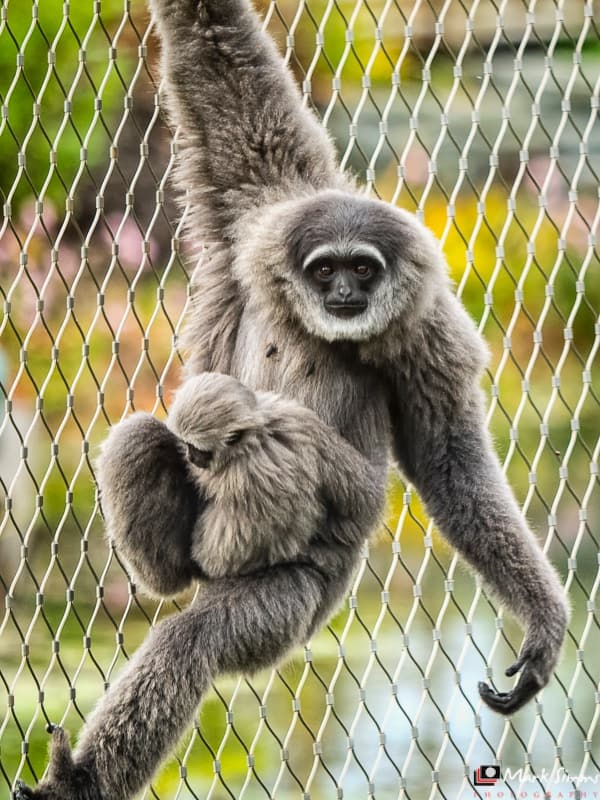 Silvery Gibbon or Javan gibbon has silver colored soft fur on its body and darker marking on its chest and cap. Like all gibbons, they have no tail and have a very lean body. The average body length is around 45-64 cms and weighs around 5-6 kgs.They are the most dwelling animal in the world. The use their long arms to jump from one tree to another as they are arboreal, they sleep, live and feed on the treetops.
The primary diet food of gibbon is fruit. Silvery gibbons shriek which can be heard from a 1-kilometer distance. 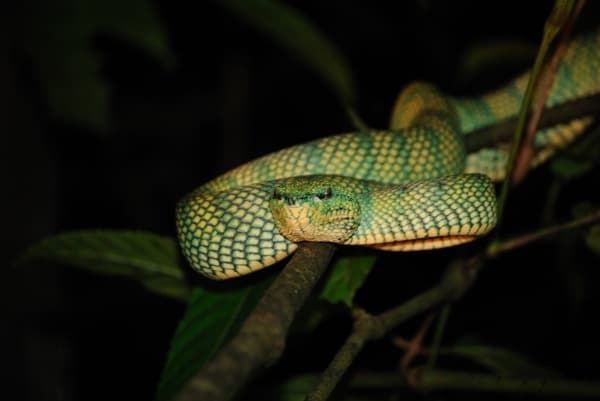 Wagler pit viper is small green venomous pit viper. They are easily identified by the triangular marks on their body. They detect its prey during the night using heat sensing pits located on their sides. They are not considered as an aggressive pit viper. Pit viper stays on the same branch for days either digesting their food or looking for prey. 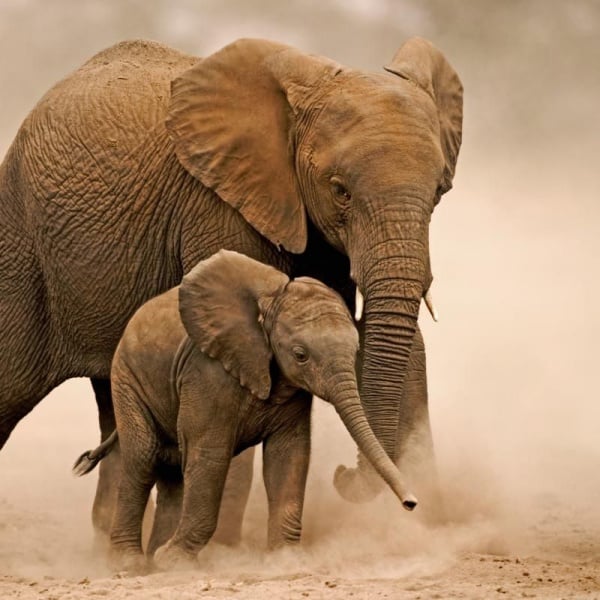 Forest Elephant is the subspecies of the African elephant, they are little smaller and their ears are more oval shaped and tusks are straighter and pointed towards a little downward direction. Their lifespan is around 60-70 years and weighs around 2700 kgs. African forest elephant uses their tusk for digging the roots and protecting them from the predators like lions and humans. They usually communicate with one another through a series of low-frequency calls.Elephants have proved themselves as one of the most intelligent animals on this earth Like this elephants have much more amazing fun facts kids must know. Female elephants reach the maturity at the age of 11 or 12 and male elephants take around 20 years.The population of African Forest elephant is still threatened by the increasing levels of illegal poaching and habitat destruction. 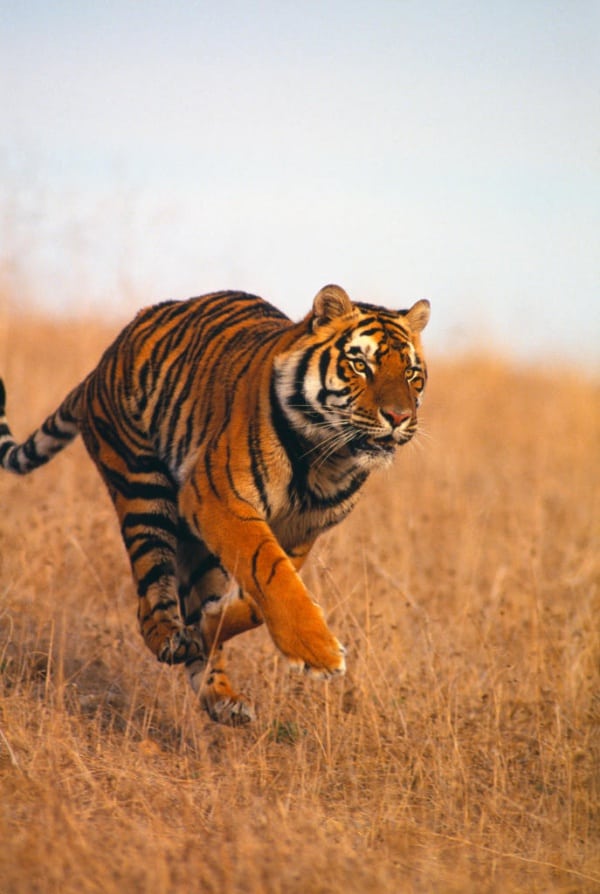 Primarily found in India, Bengal Tiger has a small population with only 2500 left.They also listed in the category of strongest animal bites in term of PSI. They are found in Bangladesh, Nepal, Bhutan, and Myanmar. Its skin is yellow to light orange color and black or brown color stripes run vertically down all its body. Every tiger has different patterns of stripes running down its body like human’s fingerprint differ in the same way their stripes and eyes differ from one another. Males are generally larger and heavier than the females. Their diet predominates the buffalo, sambar or deer. The gestation period is around 104-110 days. 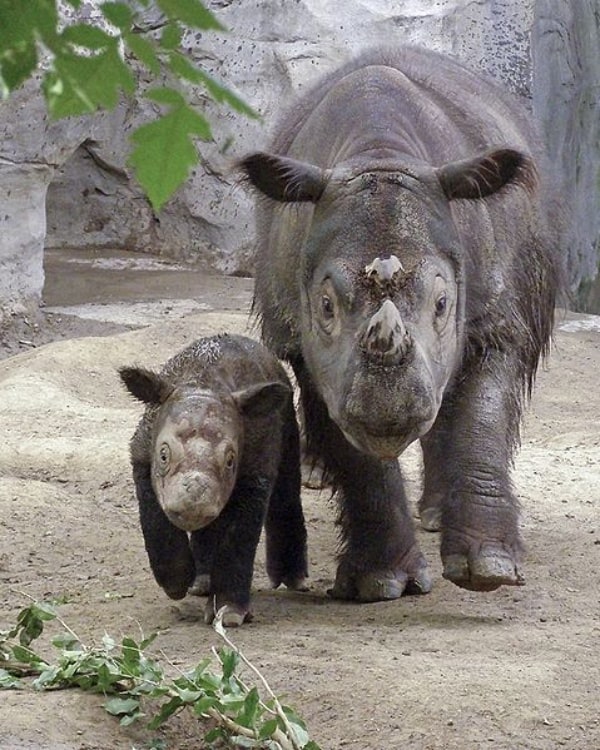 Sumatran rhinos are the smallest rhino and the only Asian rhinos with two horns. They are one of the rarest animals in the world. They are covered with long hairs and also known as hairy rhinos. They compete with the Javan rhinos. The major threat to Sumatran rhino is poaching. It is the most vocal rhino species, they communicate by marking soil with its feet, twisting saplings into patterns etc. The Sumatran rhinos are very fast and agile, they can climb a mountain and traverse riverbanks. They live in rainforest, swamps and cloud forest. During the day they wallow in mud water to cool down and rest and hunt at the nighttime. They usually consume up to 50 kgs of food in a day. 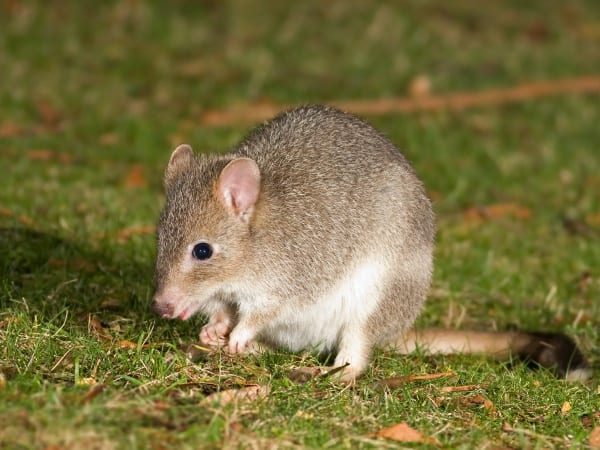 Musky rat-kangaroo is the smallest type of kangaroo, found only in the tropical rainforest. They have a brown color body and grey color head This furry little macropod has large toes to climb trees just like the rabbit. They make their nest from the dry leaves and ferns. Musky rat-kangaroo are most active during the daytime, it has a 14 cm long tail used to carry seeds. It is, in fact, the smallest macropod forms of quadrupedal and only nocturnal too. The length of this kangaroo is about 21 to 34 centimeters that are apparently equivalent to a small rabbit. In addition to its bodily size, the tails add more 6.5 to 12.3 cm. It does not weight more than 680 gm generally and not less than 332 gm. Apart from the balanced vegetarian diet that includes fruits and seed, sometimes they happen to treat themselves with small invertebrates too. 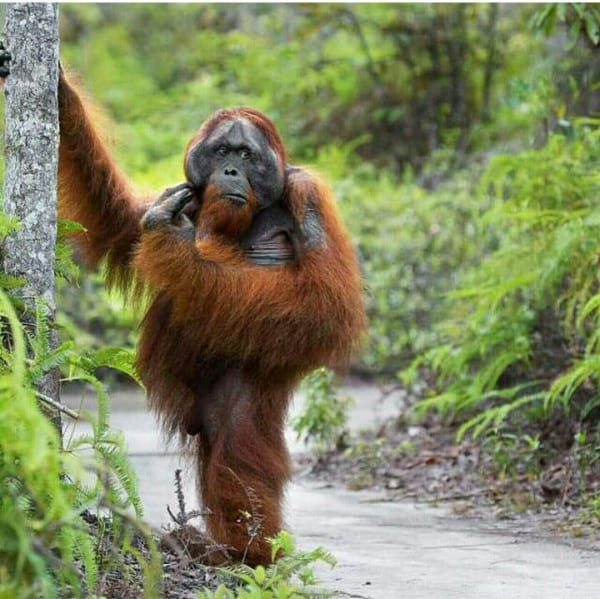 Orangutan means man of the forest.Orangutans have reddish brown hair differentiating it from the chimpanzee. Orangutans eat wild fruits like lychees, mangosteens and slurp water from holes in the trees. They make nests on the trees. They are very intelligent and construct a sleeping nest. There are two types of adult male orangutan: flanged and unflanged. Flanged males have cheek pads called flanges and a throat sac to make long calls. The unflanged males look like the female orangutans.They also have the longest motherhood period after humans.

Most animals live in the tree canopy because very less sunlight reaches the ground. The dense trees are home to many animals. The constant growth of plants throughout the year gives the regular and constant supply of abundant food for the animals.